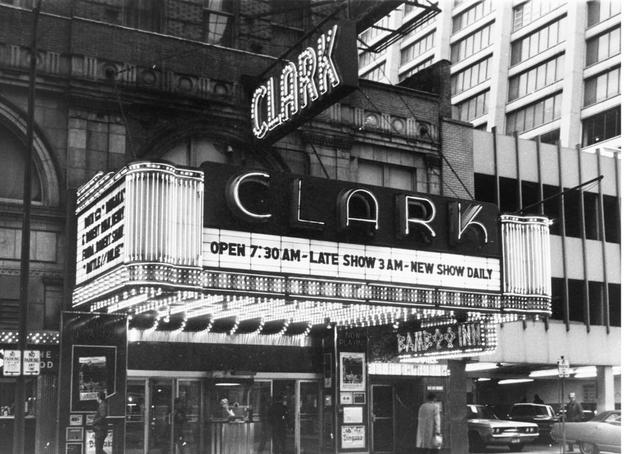 Opened as the Columbia Theatre in 1911 and designed by architect J. E. O. Pridmore, this 1,550-seat legitimate house was remodeled in 1923 by A.H. Woods and renamed the Adelphi Theatre. In 1931, the theatre was turned into a movie house, and given yet another new name at this time, the Clark Theatre (it sat close to the intersection of N. Clark Street and W. Madison Street).

During the 1950’s, the original Blue Note jazz nightclub, which hosted such legends as Duke Ellington, Ella Fitzgerald, Louis Armstrong and Sarah Vaughan, was located just a couple doors down from the Clark Theatre, until it closed in the early-1960’s.

The Clark Theatre continued to operate into the early-1970’s (by then screening adult films), last operated by the Kohlberg chain. The theatre was razed in 1974, along with the entire block of late 19th and early 20th century buildings it was part of.

Thanks for posting that great picture, David. It’s just how I remember the outside of the Clark!

A favorite of mine in the 60s and 70s — brought back old films such as Gunga Din and Zulu for the Clark’s trademark double features.

The Clark was easily the most interesting “experience” in the Loop: by 1971 or 72, not the safest place to watch a film — on a Friday night I once watched a pickpocket ring make the rounds of sleeping drunks, going through their pockets. When I mentioned it to the manager, he shrugged and said he couldn’t do much about it. At this point two of the pickpockets came out to the lobby and spoke to two other guys. Four heads turned my way and the manager said, “I don’t think you’re safe here right now.” But it was okay: I had already seen the movie twice.

I would love to receive Clark Theatre photos via email. I worked as Trinz assistant last years of daily double features as well as first run till theatre sold. Concerning film cans. Cans were brought into small manager office near entrance, then taken up to second floor (mezzanine) storage room next to men’s room for holding till day of show. Then the cans were hauled up to the projection booth, which was at the rear of the large, steep balcony. In spite of the large number of films run, I know of NO instance of any film cans ever being lost.
Concerning some movies being cut; distributors such as WB reissued movies at times in cut form (also B&W of color titles). And… Chicago had a rough censor board as well. The Clark NEVER cut films… they were run just as they came in.

I have often wondered what became of the neon clock that used to hang near the emergency exit inside the Clark. You could see what time it was while the movie wwas playing. These clocks were made by the Neon Clock Co. of Chicago. The only other theater that has one of these (as far as I know) is the Tivoli in Downers Grove.

FYI, I have started a new web page devoted to the Clark Theater: https://theclarktheater.wordpress.com/

There are just a few things there now, but I will keep adding to it over time. Your contributions are very welcome, thanks.

Growing up in Chicago was an adventure for me. I worked at the Chicago Theater when I was 16 as an usher and I went to movies every 9 am when there was no school at times. I loved the Clark theater for their double features and you could get a post card from their lobby that you would write two movies that you wanted to see. I posted one one day to see the Court Jester with Danny Kaye and the Crimson Pirate with Burt Lancaster. You would fill the card with your name, address and phone number and list the two films you wanted to see. About two months later a card came to my home at 1235 Jackson Blvd, my families Homes since 1902 til 1959 when it was torn down. And I also loved the Clark Theaters, very cheap 75 cent tickets and on Fridays they featured new grade B sci-fi horror flicks. After military service in 1964 I then worked at Brotman and Sherman Theaters for a year and also at the Crawford theater. As a kid I carried the 9-10 film cannisters up to the projection room at the Century theater and would get a free butter popcorn and a regular one and a large soda. But the Clark was a good getaway for me every week I went at least twice a week,.