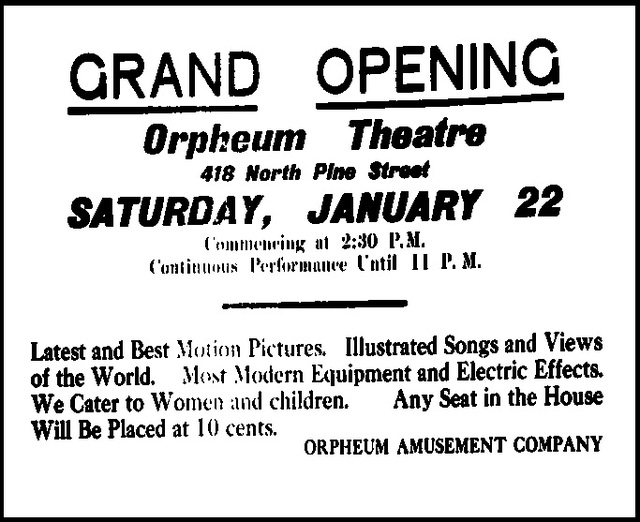 I don’t know if it was the same Orpheum Theatre or not, but the April 29, 1908, issue of the Ellensburg Capital said “The Orpheum Theater opened last Wednesday evening with a motion picture program, changing three times a week, and the attendance has been heavy. The pictures are of good quality and are well presented.”

It seems likely that the house at 418 N. Pine would have been either a new location for this theater, or a re-opening of the house under new ownership. The Capital of February 9, 1909, reported that “The Orpheum has just hung up a handsome new electric sign.”

The theater appears to have been doing well a year later, when the February 11, 1910, issue of the Capital said “The Orpheum has an automatic piano stationed in the lobby of the theater which does not fail to let the people know there is such an institution doing business in town.”

By April of 1910, a theater called the Isis had opened, and by late 1912 it had been joined by a theater called the Queen. The Ellensburg Theatre, primarily used for live performances, might have been showing movies occasionally as well. It was probably too much competition for the Orpheum to withstand.