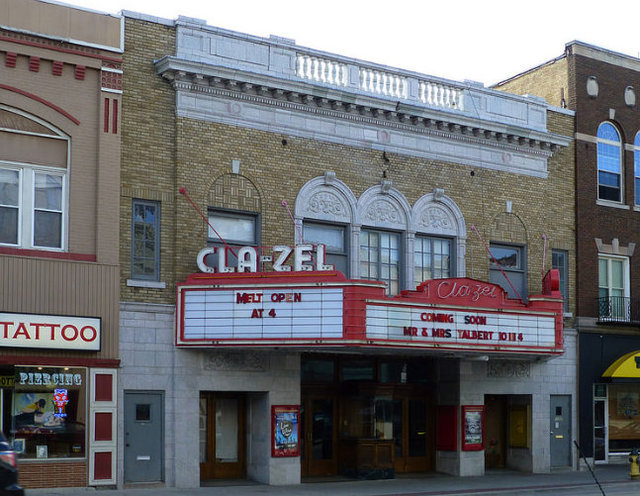 Built in 1926, the Cla-Zel Theatre was designed by renowned architect Jack Raney.

The theatre was purchased by a group of local business owners in 2000, functioning as a combination movie house and live entertainment venue. The Cla-Zel Theatre stopped showing movies in 2005, but continued to host live events.

Sold to new owners in 2007, the Cla-Zel Theatre reopened in November of 2008 as a nightclub called Club Encore. Live music returned to the club in early-2009. By 2020 it was in use as a banquet hall.

If somebody adds the Lyric, there were apparently two of that name, both owned by Clark M. Young. The second Lyric was opened in 1935, and an item in Boxoffice of September 21, a few weeks before the new house opened, said that Young was naming it the Lyric after his old theater which had been dismantled.

I’ve been unable to find anything about the State Theatre. The Bowling Greens in Kentucky and Missouri each had a State Theatre, too, which muddies the search results.

Bowling Green had yet another theater on E Wooster Street near I-75. The address was a long the lines of 1616 E Wooster. It opened around 1970 and closed in the mid- to late-80s. It was part of a chronically underperforming plaza that included a Great Scot super market and Gray Drug, along with a strip of small shops. I think it was simply the Cinema or named for the plaza (may have been College Plaza or University Plaza). I think it always had at least two screens. It tended to get 1st run films before the Cla-Zel, which spent many years as a low price, second/third run theater.

there was 5 functioning motion picture theatres in the bowling green area. Lyric, the State, The Stadium 1&2, the Cla-Zel, and the Portage Drive In (just outside BG). For those who remember the offices for the Armstrong Circuit Theatre Group were located above the rogers pharmacy, next to the Cla-Zel. Factoid, the Armstrong Circuit also was very community oriented, they had a train that kids could ride during parades, and at the portage drive in on movie nights. When the Portage Drive In was demolished, the “Armstrong Tooter” was sold to a local resident, the Tooter was in poor shape from being stored under the screen all of those years, never being used and weather and bird dropping placed on it, so no one knows if anything has been done to it since.

Remembered seeing “Rain Man” at this theater for the second time in April 1989 (I saw it first two months earlier at the Showcase Toledo Cinemas on Secor Road, which I understand is now demolished).

When the Delmar Theatre burned on September 29, 1926, the Cla-Zel became the primary theatre in town with the aging Lyric the back-up “B” theater. Clark M. And Hazel Young opened the venue fusing their first names as the Cla-Zel. It opened in 1926 with a Marr & Colton Symphonic Registrator Organ. Later operated by the Armstrong Circuit.