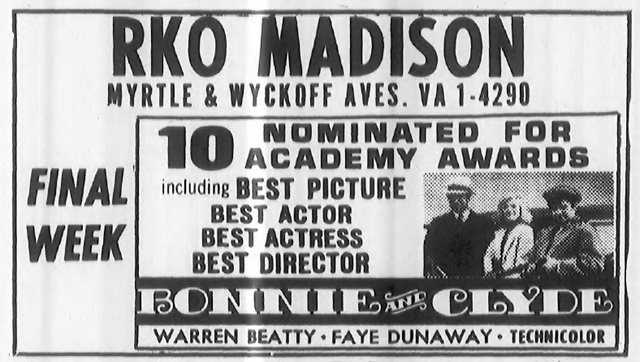 Located in the Ridgewood section of Queens. The RKO Madison Theatre was opened on November 24, 1927 presenting Keith-Albee vaudeville and a feature movie George Bancroft in “Underworld”. It was operated by B.S. Moss, an affiliate of Keith-Albee. It was a first run RKO theatre that had a huge stage that often ran live shows along with the film. I have seen ads from the 1960’s that show a lot of personal appearences here. By the 1970’s the Madison Theatre was on the AIP grind run, I remember seeing “Squirm” and “Tenticles” here right at the end.

The current retail space uses the lobby and inside the auditorium there is a false ceiling across at the underside of the balcony level.

I think it was the one with Hercules – the guy who played Hercules appeared with them. A few years ago, someone noted the date of these appearances at a number of theaters. If you search this thread, you may find this reference.

To Ed Solero and his question from Sept. 13, 2007 regarding theatres used in the making of both the 1933 and 2005 King Kong movies. I was researching the now gone Ridgewood Theatre and, from there, looked up the RKO Madison when I spotted your question in the comments. Anyway, if you haven’t already found this out you were correct in that the Shrine Auditorium was used in the 1933 film. In the 2005 version the Civic Theatre (1929) in Auckland, New Zealand was the theatre auditorium that King Kong destroyed. Also, in the early 1960’s, the late Carl Weiss restored and played the RKO Madison’s 3 manual 15 rank Wurlitzer theatre organ for intermissions. He really loved how that organ sounded in the auditorium.

I was born on Madison Street a block away from the Madison Theatre and Ridgewood Theatre, cost 50 cents and I saw 2 movies, coming attractions and cartoons, they used to put cardboard posters outside, and there was always photos of the current movie to get us in, anyone remember that?

Mario Manzini here. I performed at the RKO Madison Theater on stage with my Escapology show on May, 1966. It was the first RKO Theater that I ever performed at. Many others followed. To promote my stage show there I did an escape from the old Ridgewood Court House Jail cell which made the Ridgewood Times and all NYC newspapers. Houdini’s brother Theo Hardeen had his stage show at the Madion Theater in 1946. Right after the show he was taken to the hospital where he died from Esophagus Cancer.

The opening movie at the RKO Madison in 1927 was “Underworld” with George Bancroft.

I went to Liberty yesterday (1/29/2020). Was the theatre gutted to the bricks or does anything survive of the old theatre?