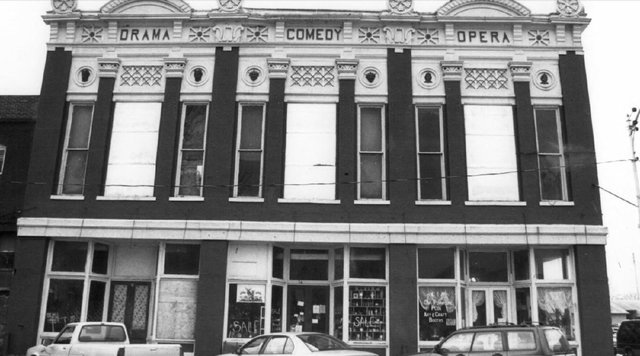 The Opera House was opened on October 8, 1888. The theatre seated 402 and was still operating into the early-1960’s. The building is now used for the Dade County Community Theatre during the summer months. The Greenfield Opera House is on the National Register of Historic Places.

This listing is in error as it was not the home of the 1939-era Plaza Theatre. That was located in the Community Building. This venue is open as the Greenfield Opera House and opened as the Opera House. Dedicated on August 8, 1888. Regular programming was discontinued in 1917 though sporadic events took place soon thereafter.

The old opera house was purchased in 1987 by a group trying to rekindle its past.In August of 1988, the theatre re-launched with a live play. It also served as a home for country music until 2010. That building was brought back to usage in 2018 with live music and local events.

This venue is open as the Greenfield Opera House and opened as the Opera House.