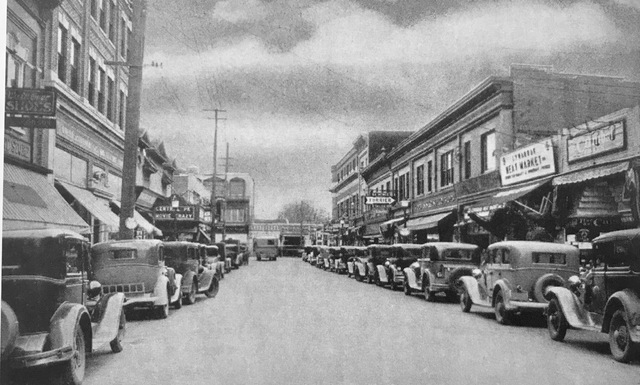 The Arcade Theatre was opened prior to 1913. On April 14, 1965 it became Studio 1, a small independent art house down the block from the Lynbrook Theatre. It was renamed HK Studio on December 7, 1971. It was closed on October 23, 1986. I think it may have changed owners near the end and was running mainstream first run films.

Ed, what happened to the photo you mentioned in June?

Every time I’ve been in Lynbrook Bagels since then, I haven’t seen the owner or manager – just the girls out front handling the busy line. I have to get in there when it isn’t so crowded and bustling and ask about that image.

Re your comment that perhaps the Lyric became the Strand in RVC. I doubt it. The Strand had a seating capacity well over 1,000. Highly unlikely in this time period.

Photo of Studio 1 from American Classic Images and a 1916 photo of the Arcade have been uploaded. Arcade was on the west side of Atlantic Avenue so this view looks south. Note the original entrance to the Arcade WAS an arcade. Now we need a later shot with the Arcade marquee referred to by Ed Solero in earlier postings.

Just added a photo of Atlantic Ave circa 1932/33 that shows a glimpse of the Arcade Theatre marquee. This is the same pic I’ve seen in rotation on the display screens mounted inside the Lynbrook Deli.

Please update, Studio 1 closed in the summer of 1986. During the late years of operation, they started show art house films.

And for one of those art films was the only time I was ever in the theater. There was no balcony and the ceiling was quite low. I think it was those metallic squares from way back when.