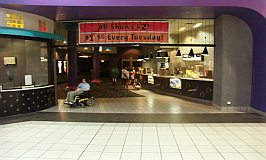 Sub-run house in the Golden Triangle Mall. It opened by United Artists on March 17, 1995. It was later taken over by Silver Cinemas and is now operated by Landmark Theatres. It was closed by Landmark on September 25, 2022.

United Artists Theatres opened this Cinema as a first run house on March 17, 1995.

Now showing films on only 3 screens. Probably can’t afford to go digital in all the auditoriums.

The original UA Golden Triangle 4 operated to the end of its 20-year leasing agreement closing quietly on March 26, 2000 with UA continuing with this interior theatre. UA later downgraded the theater to a discount, sub-run venue before discontinuing operations at the end of its lease. Silver Cinemas, a discount specialist, took on the location and ran it continually until the COVID-19 pandemic which temporarily closed the cinema on March 16, 2020. The theatre was among just a handful of discount movie theaters nationally which would get second-life relaunching a year-and-a half-later on September 29, 2021.

The discount theatres struggled mightily in late 2021 to get second-run product to fill their screens and Silver Cinemas changed course in December of 2021 opting to try a policy of first-run features under the Landmark Theatres circuit brand name. The theater’s policy change combined with the shuttering of Cinemark’s Hollywood USA in Garland also in December of 2021 ended sub-run, discount films in mega/multi-plexes in Texas if not the entire Southwest. It also left Silver Cinema with one official theater in operation - the Market Square in Madison, Wisconsin - which continued with discount films until closing in February of 2022.

Landmark has temporarily closed the Golden Triangle location as of September 26, 2022

The Golden Triangle is the area extending from Denton at the north point to Dallas at the southwest point and Fort Worth on the southwestern point. Each had a role in the marketing of the area to industrial, educational, and commercial development. Developers announced the mall project in 1978 under the name of the Golden Triangle Mall. It had its groundbreaking on June 22, 1978. The original outparcel United Artists was announced as one of the original tenants. That venue opened in June of 1980 (as noted above, it made it to the end of its 20-year leasing term and was shuttered). To answer the question, that outparcel has long since been razed and was later replaced by a Staybridge Suites hotel.

Competition for mall space occurred when the Vista Ridge (later Music City) Mall opened in 1989. With folks bailing out of the tarnished Golden Mall at their 15-year lease opt-outs, the Mall was refreshed including an interior space carved out for the U.A. Golden Triangle 5. The theaters thrived until major competition from a modern Cinemark megaplex across the highway. From there, the interior Mall theater fought against insurmountable odds to try and make it to the end of its lease. UA achieved that but only as a sub-run discount house. Silver Cinemas continued the venue as a discount house.

Following COVID-19, the theatre staged an unlikely comeback relaunching after a year and a half after its March 16, 2020 closure likely negotiating a sweetheart year-to-year lease on September 29, 2021. On paper, Landmark Theatres took over the venue from its own Silver Cinemas in February of 2022 when the circuit dissolved the Silver Cinemas nameplate. The theater escalated to first-run when discount titles were challenging to find and customers of second-run product almost as rare. The customer base was thin with the theater finally operating only on weekends as it reached its first anniversary in its post-COVID closure existence.

Landmark closed here on September 25, 2022 likely bailing instead of opting for another year (if that was indeed the agreement). That left Texas with a single Landmark location in the Inwood Theatre. The Mall management obviously likes the foot traffic offered by a theater and hopefully it will return. But the odds seemed likely against it with modern megaplexes and destination bar/food alternatives very close by.