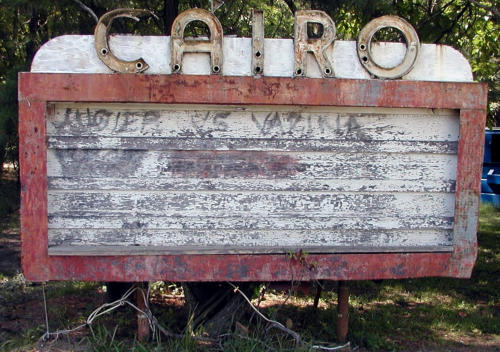 The town of Fuquay (Springs?) merged with the adjoining town of Varina over fifty years ago and is now Fuquay-Varina. Fuquay-Varina and its predecessor towns were/are in the southern tip of Wake County where US 401 South (Main Street in F-V) intersects with NC Highway 42. The closest operating cinemas to Fuquay-Varina are two Regal multiplexes: the White Oak Stadium 14 in Garner and the Beaver Creek Cinemas in Apex. The Fuquay-Varina area is rapidly growing and may eventually get its own multiplex, possibly before the eastern Wake County towns of Wendell, Zebulon (which aren’t growing fast enough to warrant a multiplex) or Knightdale (which was promised a multiplex years ago but it never materialized).

The approximate location of this drive-in was on N Main St. east of Mill Creek Dr. Look for Cinema Dr. in Fuquay Varina.

The Cairo Drive-In was open as early as 1950, since it is clearly visible on aerial photos from 1950.

Also, this was originally called the 5 Points Drive-In, due to the proximity of the intersection of NC-55, NC-42, and US 401, known locally as “5 Points.”

Film Daily Yearbook also refers to the drive-in in Fuquay Springs (now called Fuquay Varnia) as 5 Points Drive-In, from 1950 to 1955, after which time it is referred to as Cairo Drive-In in all yearbooks going forward, with no further mention of 5 Points Drive-In after 1955.

From my many drives thru town,there is a brick building on main st,,that sure looks like a former theater .

Boxoffice, May 2, 1960: “James M. Bullock took over ownership of the Cairo Drive-In, Fuquay Springs as of April 17”

The Exhibitor, Jan. 27, 1954: “The Five Points Drive-In, Fuquay Springs, N. C., changed hands and now is being operated as the Cairo Drive-In, with the new owners and operators being Mack Weeks and William Lipscomb, who inaugurated extensive renovations and repairs, added a marquee and rest rooms, installed new fencing, and planted new shrubbery. The drive-in will be operated only on Friday, Saturday, and Sunday nights until April 1.”