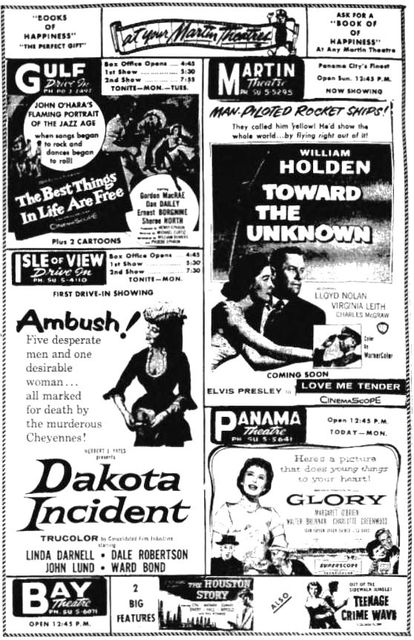 There were two houses called the Bay Theatre in the Panama City area. The first was a small house that was being operated by J. E. Church at the time Martin Theatres bought out Church in the early 1930s. The original Bay Theatre was subsequently closed.

Martin later built the second Bay Theatre, which was located at Highway 98 and Wewahitchka Road (now E. 3rd Street) in Springfield, Florida. Although Springfield is a separate city, everything in it, including the city’s offices, has a Panama City address. Construction was begun on the second Bay Theatre in early 1942, but wartime material restrictions delayed its completion.

The second Bay Theatre advertised in the December 30, 1957, issue of the Panama City News, but I can’t find any later ads. For at least a year prior to that the house had most often shown double features of older movies, with the program changing three times a week, so it was apparently surviving as a revival house with occasional double features of exploitation movies.