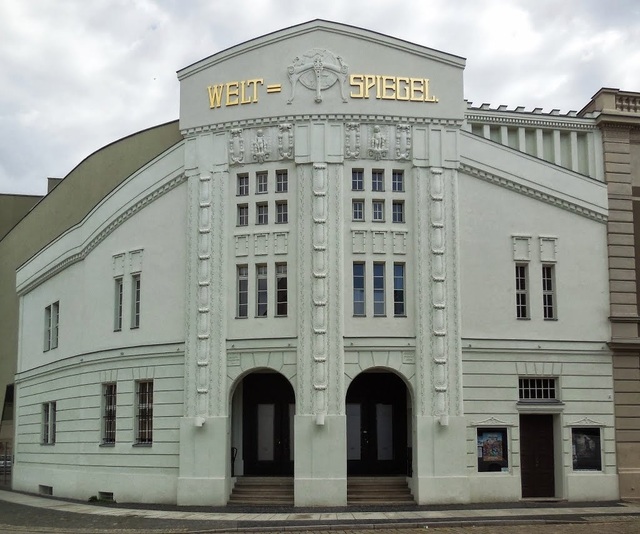 The Kino Weltspiegel (literally: the world’s mirror) is one of the world’s most ancient cinema buildings and is listed as a monument. The cinema is located in Cottbus, in the East of Germany to the south of Berlin and north of Dresden, in the centre of the Lausitz region. The cinema opened October 1911 as a single-screen theatre with 519 seats in orchestra and balcony levels. The cinema survived all political systems and was taken up by the Ufa cinema chain after the German reunification for a few years. It was closed in 1998.

After a few years of closure, the cinema underwent a substantial renovation to the plans of architect Alexander Fehre, which left the orginal theatre intact and returned ancient glory to it. The theatre today presents itself as a very noble place with very tasteful interior. The golden panelled ceiling is marvelous, the yellow comfortable seats are in perfect harmony with it and a floating screen is duly covered by a dark curtain. The main theatre has 500 seats making it one of the biggest theatres of the region. The renovation has added two new 80-seat screens in adjacent space and has also brought about a new film bar. The “new” Weltspiegel re-opened in 2011 - so to speak for its 100th birthday - and has been a huge success and has entered the list of the most beautiful cinemas of Germany. It screens mostly arthouse films thereby complementing the programme of the usual multiplexes that have spread in the region since the late-1990’s.