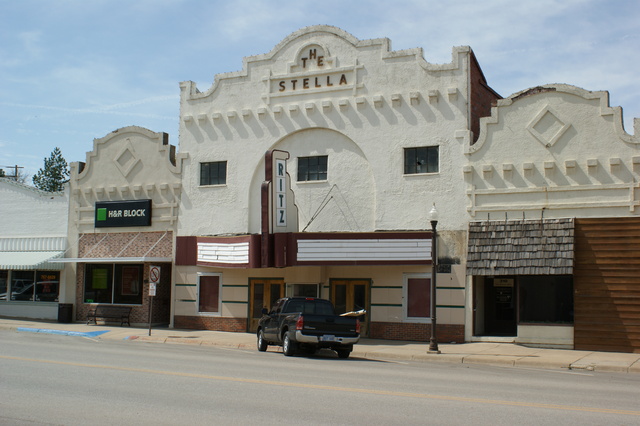 The Stella Opera House opened in 1916. It was renamed Stella Theater in 1918 when it began to screen motion pictures. It was renamed Ritz Theater on September 21, 1936 and was closed as a movie theatre in 1999. In 2000 it was used for special events.

85-year-old eastern Kansas theater located in Council Grove was purchased by a Lawrence, KS businessman in 2001 but he says that he will give it to anyone who will spend the estimated $400,000 to repair and save the theater.

It was built in 1918 by T.W. Whiting, named for his daughter, hosted live musicals and theater productions and showed daily silent movies. Last movie shown there in 1999, final live performance the following year.

Needed repairs include bringing the restrooms into compliance with disability laws, and a leaking roof.

There are some photos on this page:
http://tinyurl.com/kqyr4p

A book published in 1921, “The Story of Council Grove on the Santa Fe Trail,” says that T.W. Whiting built the Stella Theatre in 1916 and gave the deed on the property to the daughter, Mrs. Glen Kelly, for whom the theater was named. The house was sold to W.R. Bratton in 1921. A book from 1912 reveals that Whiting’s full name was Thomas Wilbert Whiting.

The Ritz was being operated by Mary Picolet by 1986, when she was quoted in this Chicago Tribune article (which only mentions the theater in passing, but is about an event too entertaining for me not to link to it.) I’ve also found Mary Picolet mentioned as operator of the Ritz as late as 1997, so she might have run the place right up until its closing.

The 1912-1913 edition of Julius Cahn’s Theatrical Guide listed an earlier theater in Council Grove, the Etta Opera House. I don’t know what became of it after 1921, when it was serving as an armory, or if it ever operated as a movie house, but small town opera houses of that era frequently did present movies.

The “New Theatres” column of the January 15, 1938, issue of The Film Daily lists a Roxy Theatre at Council Grove. That’s the only mention of the Roxy I’ve found in the trade journals. The Stella/Ritz and members of the Bratton family were mentioned quite often.