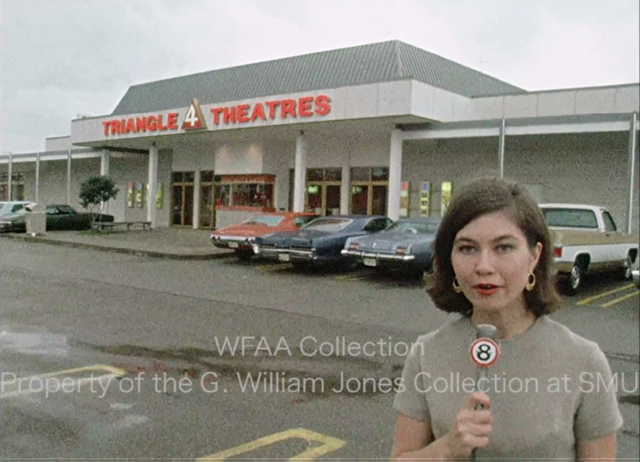 Located in the still existing Golden Triangle Shopping Center at S. Polk Street and 67. The AMC Triangle 4 opened July 1, 1971. It was closed by AMC in February 1974.

The operators of the Canyon Creek in Richardson, TX reopened the Triangle 4 in the summer of 1976, operating it as a Dollar house sub-run theatre. This quickly closed. The theatre was converted into retail space, and as of 2015, like its nearby former Oak Cliff cousin AMC Western Park 4 five miles away, is a Family Dollar franchise retail store.

The Golden Triangle is the area extending from Denton at the north point to the south with Dallas on the eastern point and Fort Worth on the western point. Developers launched the Golden Triangle Shopping Center in 1964 at the confluence of U.S. 67, S. Polk Street and W. Pentagon Parkway forming a triangular plot of land in south Dallas' Oak Cliff. The fast-growing AMC Theater chain wanted to follow up its uber successful AMC Northtown 6 and its follow-up AMC Northwood Hills on the border of Richardson with another 42 screens with 10,000 seats in the 1971 calendar year. Oak Cliff would receive two theaters during this growth spurt.

Both theaters would be almost identical to the Northwood Hills 4 and the Triangle 4 would be the first of the two Oak Cliff properties to launch. Opening July 1, 1971 with “Cold Turkey,” “Patton,” “The Owl and the Pussycat,” and “Song of Norway,” the theater was underway. Four months later and just 4.5 miles away, the theater’s cousin – the Western Park 4 launched, as well. But the population shifts were rapid and the Western Park 4 closed just seven months into what was a disastrous situation.

The Triangle 4 was AMC’s last theater standing in Oak Cliff. It wouldn’t last long, either. The theater failed miserably closing in February of 1974. The theater would get one last shot at finding its audience when the operators of the Canyon Creek took on the theater in the summer of 1976 running it as a sub-run dollar house. The neighborhood didn’t show up and the theater was a quick casualty. Both the Western Park 4 and the Triangle 4 would have two different operators and both failed to gain an audience. Their total running time was four years combined. AMC wouldn’t repeat the mistake by building any more theaters in Oak Cliff. The only theaters which would be added would be General Cinemas adding two multiplexes near Red Bird Mall and United Artists building an eight-screen ‘plex in the vacinity of Red Bird Mall.

As of the mid-2010s, both former AMC theaters were still standing. Both were converted into retail spaces. Both were in business as of this writing. The Western Park 4 was a Family Dollar franchise retail store. And the Triangle 4 was also a Family Dollar franchise retail store. An odd coincidence for two of the worst performing new-build theaters in the history of Dallas.

What year did this theatre closed?