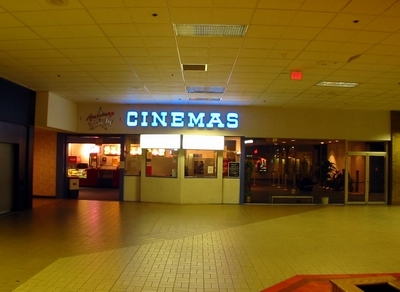 Opened October 13, 1965 as a twin, with 1,000- and 510-seat auditoriums, the Livonia Mall Cinema I & II, as its name implies, was built at the Livonia Mall. It purportedly cost $2 million to construct, and advertised “picture window” screens, which were just screens on sunken walls. It also featured a small “art gallery” in its early years.

In the 1980’s its main auditorium was divided into two 455 seat auditoriums, thus it was renamed the Livonia Mall Cinema I,II,III. It was renamed again in 1991, as the Cinema Livonia Mall, and by this time, its largest screen (510 seats) had Dolby sound installed.

When the mall received a facelift during the 1980’s, the theater was not included, and by then was notorious for its bad seats, sticky floors and generally dirty appearance. General Cinemas, which was the theater’s original owner, sold the triplex to Cinemark in the early-1990’s, which turned it into a bargain price house.

MJR Theatres later ran the theater in the 1990’s. It became independently owned in 2002, renamed the American Family Cinemas and operated as this until its closure at the beginning of 2008.

Closed this year as far as I know, last known it was open in December. Either way it’s closed today.

Status should be changed to demolished. Livonia Mall has since become an “open air” mall, without any cinemas.