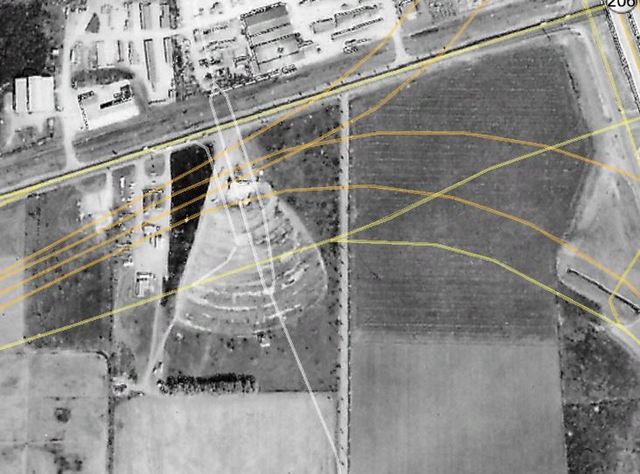 Located on Highway 83. The Valley Drive-In was opened February 8, 1945 with Esther Williams and Red Skelton in “Bathing Beauty”. It was built by C.A. Richer of Lone Star Amusement Co., who claimed he had previously built the third ever drive-in in existence in the USA. He had theatres in the Texas cities of Houston, Corpus Christi and San Antonio prior to the opening of the Valley Drive-In.

The correct address is:

Architected by Hammond and Company, Charles A. Richter and Frederick Martin’s $75,000 Valley Drive-In was showy. The Spanish Colonial architecture, gaudy colors, neon, and landscaping made a nice backdrop for theater-goers and passers by, alike. Composed of brick, steel, concrete and glass brick with maroon accents, the theater tower was best remembered for its tropical palm mural. The 38x52 foot screen had a black matte and a sliver screen projection area. In addition to its 300 spaces, there is a long row of benches for people without cars (which can be seen in one of the photos). Richter claimed to have built the third ever drive-in in the USA. In 1948, Richter became president of the Independent Drive-In Theaters Association located in Austin, TX. The original co-owner of the Valley, Frederick Martin, is listed as its sole owner later that year.

Good call on the closing Drive-In 54: The year-round operation appears to have ceased operations just after its 15th anniversary celebration. The last showtimes advertised were on Feb. 22, 1960 with “The Diary of Anne Frank.” The land was leased from a local farmer which may indicate the end of a 15-year agreement.