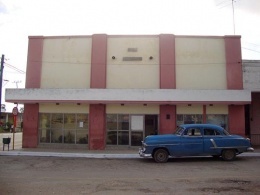 Located in the central Cuba town of Fomento, in the Las Villas province. Manuel Gonzalez Candelario (nicknamed ‘Marruco’) demolished a coffin factory in 1943 to build the Teatro Marruco on Juan Bruno Zayas, between Carlos Manuel de Cespedes and Jose Marti. It was just a few yards away from the Cine-Teatro Baroja.

Named in honor of its founder, the Teatro Marruco opened in 1946 with the Mexican film “Crepusculo”(1944) starring Gloria Marin and Arturo de Cordova. It specialized in Spanish and Mexican films.

In 1962 it was confiscated and re-named Cine Silvino Aguila.