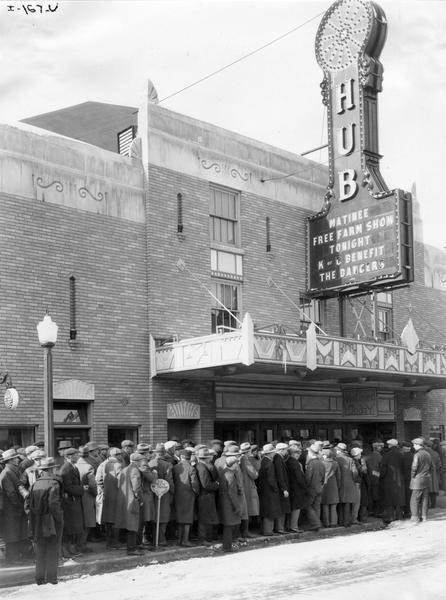 Opened in 1931, this nearly 950-seat Art Deco-style theater operated into the 1950’s. It was originally part of the Alger Theaters chain.

During the 1980’s, the Hub Theater was split into three screens, by twinning the main auditorium and closing off the balcony. It continued to operate as a first-run movie house until early-2011.

my name is robert pounders…i spent many hours in the hub growing up and miss it…sorry to hear it was split up into a three auditorium years ago…i probably was the only person to be locked in the theater at night…i had fallen asleep and woke up locked in..the manager was called and let me out and i got a ride from the police and my butt beaten by my mom…never has happened again…i now reside in astoria oregon and hope to return one day before i leave this world….bob

i would like anyone who remembers the night a boy was locked in at the theater to email me….thx bob

According to Phyllis Behrns, the Hub was designed by her father-in-law, architect Elmer F. Behrns.

My dad was E.E. Alger (he died in 1968). His theater company was based in Peru, Ill at the time he signed a lease to operate the Hub theater and never in Chicago. According to my dad,the building was not built for him; he got involved when the owners of the building faced mortgage foreclosure and came to him for help. He had a long and pleasant relationship with the building owners and residents of Rochelle until he decided to get out of the business in the late 50’s after more than 50 years. I visited the theater occasionally when I got involved in the business.I can’t remember the names of the building owners but I remember the blonde manager named Lindy Castle (or Kassel) and his wife Angie. Also, My mother’s nephew,Ralph Tafflinger was manager before Lindy. Does anyone out there remember any of this? I would appreciate hearing from anyone who can give me some more history.
Bob Alger ()

Rochelle is a really nice small city to visit. Do like I’ve done. Spend a day at the Rochelle Railroad Park (a busy crossing of the BNSF and UP Railroads), and then take in a movie at this neat (albeit subdivided) theatre.

This theatre was recently used in the movie “AT ANY PRICE” starring Zac Efron and Dennis Quaid (released April 2012). The movie was shot in DeKalb Co.

There is a new effort underway to return this theater to days of glory.. http://www.thehubtheater.com Please help- Time is very,very short . Lets not let another theater die….