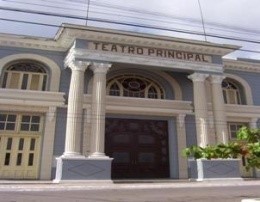 Located in Ciego de Avila, in Camaguey province. The Teatro Principal was inaugurated on March 2, 1927.

There is a legend that Dona Angela Hernandez viuda de Jimenez tried to get a box at the Teatro Iriondo in 1922 for Mexican actress Esperanza Iris' performance and when it was sold out, she indignantly announced she was going to have a better theatre built than the existing one. She did have the funds for it and construction began in 1924, based on Italian architectural models, and two Italian artists by the name De Marcos were hired for the gypsum decorations. The imported marble used and the bronze of the balustrades were worked by Giovanni de Marcos. The architecture is eclectic. Each window door provides access to a small balcony. The balconies are duplicated on the second floor. The stage has a double arch, supported by four columns decorated with sculptures of human figures and big masks.