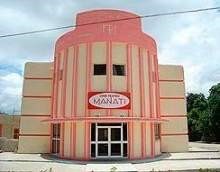 Located within the Central Manati Sugar Mill, opposite Jose Marti Park in the municipality of Victoria de las Tunas, in the Oriente province. The original Cine-Teatro Manati was a wooden building which opened in 1914. It was destroyed by a fire in 1929.

A new cinema was built on the site which opened in November 1944.

The first Cine-Teatro Manatí was a wooden structure built on Calle A, which opened in 1914 and was destroyed by a fire in 1928. This theater, located in the Manatí Sugar Mill across the José Martí Pérez Park, opened in November 1944 and initially showed Argentinean and Mexican films, and Westerns.