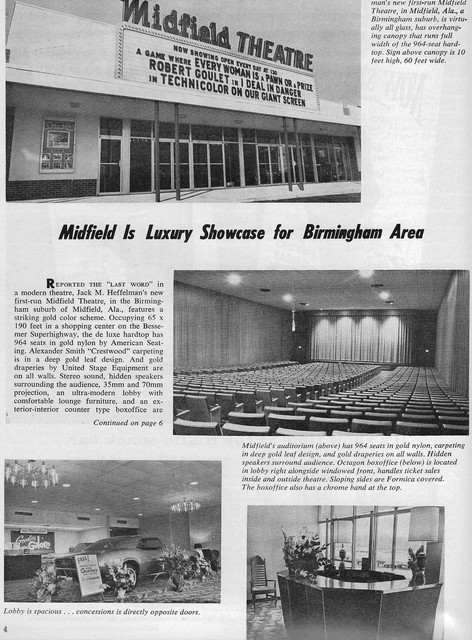 An article in the Birmingham News from February 1967 announces the opening of the Midfield Theatre. The owner was Jack Hoffman of Huntsville and the manager was Jimmy Pepper. (The last names may be Huffman and Popper. The quality of the reproduction makes it hard to be sure.) The theatre was equipped with 966 rocking chair seats, 35/70MM projection and 4 and 6 channel sound. The auditorium was draped and the lobby furnished in the living room style so common to those mid to late-1960’s era theatres. The article notes that this opening now gives Birmingham three new first run theatres located in suburban shopping centers to go with the existing four first run downtown locations.

So, in Birmingham as elsewhere the death spiral of downtown movie theatres is about to begin. I do not have an exact address for this location, but if you lived in Birmingham in those days you did not need much more than “Bessemer Super Highway” to find what you were looking for.

The opening feature on February 4, 1967 was William Castle’s “The Busy Body” starring Sid Caesar, which was not exactly prime first run material. In later years the Midfield Theatre would be taken over by the R.C. Cobb chain which dominated the Birmingham movie scene from the late-1960’s to the late-1980’s. It was twinned on March 30, 1973 and became a 6-screen theatre on December 16, 1983. By mid-1984 it was reduced to playing day and date with the downtown Melba Theatre and Empire Theatre which Cobb had also purchased from their independent owners. One advertisement shows the Midfield 1 playing a double feature of “From China With Death” and “Dragons Vengeance” concurrent with the Empire Theatre and Midfield 2 playing “Savage Sisters” concurrent with the Melba Theatre.

Still first run programing perhaps, but not what they had in mind when they opened this state of the art theatre in 1967. 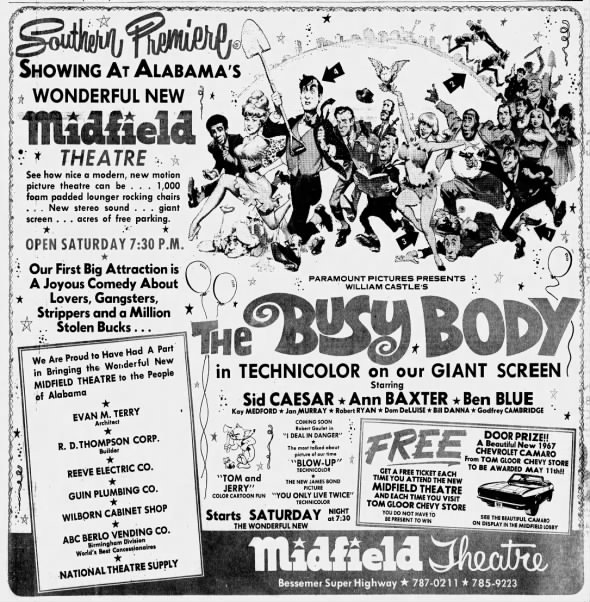