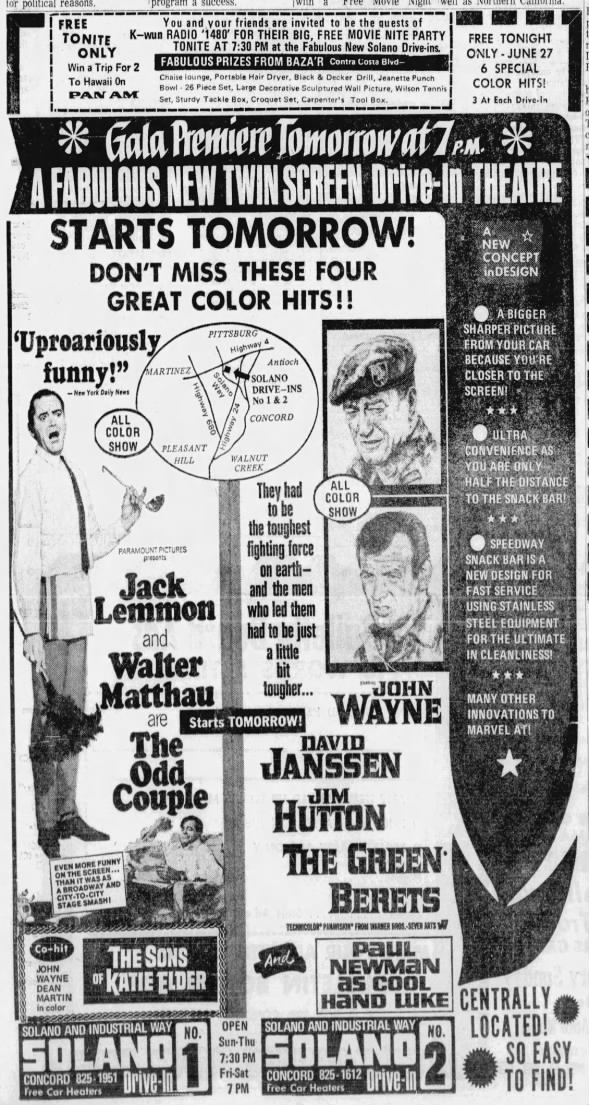 I remember going with a buddy who brought a VHS camcorder and set it up to record Batman and Lethal Weapon. He had the whole thing in a box, so that it would pick up the sound better!

Saw many movies there from 1970-75 before moving to Canada. Plenty of good memories, no especially bad ones. Up here in Canada there are few if any drive-ins (rains way too often in Vancouver).

This opened in December 1972 (when SFC listings started)

The Syufys have installed digital projectors so the Solano drive in will stay open following the full transition to digital media in Dec 2013. Honda is holding a contest to save other drive ins across the country. www.projectdrivein.com

I used to pass this D-I almost every day in the 90’s. I love how they still use the Solano Way address since the entrance hasn’t been on Solano since the early 70’s!!!

The drive-in is no longer seasonal (hasn’t been since it reopened). It runs year round!

There are plenty of photos at http://www.cinematour.com/tour/us/1933.html

Does anyone have any photos of this twin drive-in?

I am so excited they reopened this drive-in! I’ve been driving 45-minutes to San Jose to get my drive-in movie fix. See you there this summer. I’ll be double-fisting snacks, sitting on the tailgate, squinting to see all of the dark scenes.

Check out my blog to see what I have to say about the Solano Drive-In, this piece of junk theatre should be bulldozed.

The “new” operator is West Wind Drive-Ins (which is owned by Syufy Enterprises—Syufy was the former owner of the Century Theaters chain prior to it being bought out by Cinemark). West Wind apparently now owns & operates the 6 drive-ins that Century Theaters had (including one in Sacramento & the Capitol Drive-In in San Jose). I guess Cinemark wasn’t interested in drive-ins when Century Theaters was bought by them.

The second screen will be running by May 18th.

Does this mean that only one screen will be operating? Still this is great news!

The Solano Drive-In re-opens tonight with a free showing of Shrek 2 and Nacho Libre. It will be opening full time starting tomorrow May 4th with a double feature of Spiderman 3 and Ghost Rider.

This drive-in appeared in the film “American Graffiti”.

I work at a theatre in Pleasant Hill.

I am amazed by the people over the last 10 years who ask me where this former drive in was/is and who still think it shows movies.

My girlfriend and I saw movies there at one time but I can’t recall which ones.

I remember reading an article in the newspaper years ago about people who parked across the street in the empty lot next to the freeway offramp and watched the movie from there for free. These people talked freely about what they did, like they thought they were so clever in finding a way to screw the owners rather than supporting them by spending a few bucks. So all of us drive-in fans have these morons to thank for doing their part to hasten the end of an era.

That sucks. My kids and i loved to go to the drive in movies. And we looked forward to the weekends when we went to the flea market. Ive been going there since i was born like 27 yrs ago to be exact. They should definitely raise the admission prices and FIRE ALL THE TWEEKS.

I can’t believe it is coming to this! I too will miss the Solano. Was really looking forward to it’s hopeful re-opening. Does anyone know if it is up for sale? Many happy memories there, and in Daly City. Fell asleep with a date there once. :)

I’m sad to report that a call to Century Theatre headquarters has confirmed that the Solano Drive-in will not be reopening for the 2005 season, and is not likely to reopen at any time in the future.

This was the last remaining Drive-in operation in the East Bay. It will be greatly missed.

I also remember the flea market. When I saw films at the Solano in the 1970s, it played everything from A-run Hollywood movies to the worst horror dreck imaginable. It operated year-round at that time. Of the latter, a memorable triple bill was Corpse Grinders, Undertaker and His Pals, and The Embalmer. It was easy to watch the 2nd screen if the 1st screen was a bore. Airplanes took off and landed right next door at a regional air field. The concession stand was an enormous circus-tent style arrangement, which was typical of the Syufy driveins of the period.

Before I moved to Minnesota, I went to the flea market one last time with my ex-boyfriend to sell stuff at the flea market. Said ex told me last month that he had just been there with his son, pushing him in the stroller, thinking about the zillion times we went to the flea market on a Sunday. And I remember it from even further backâ€"as a teenager going to the drive-in movies, eating popcorn and smokingâ€¦ It would be a shame if the Solano were torn down.