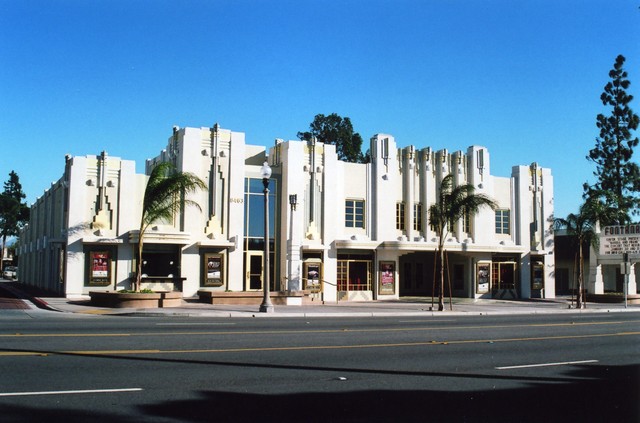 The Fontana Mummers said that their home was designed by the Boller Brothers in 1937 to look like Frank Lloyd Wright’s Midway Gardens in Chicago. Unfortunately, it stopped being a movie theater in the early 1950’s and has been used for a variety of purposes including an Elks lodge, a skating rink and retail stores.

One of the theater’s notable features is its free-standing Art Deco marquee. It was purchased by the Fontana Mummers Community Theatre, a non-profit corporation, in 1999 and underwent some restoration. The Mummers, who provide live theater to the community, were accepting donations to further the restoration. They left the building in 2003.

The theatre was re-opened in July 2008 as Center Stage Theatre for live performances.

The seating capacity of the Fontana Theatre was 750, all on one floor.

It opened in July 1937 with the movie “Easy Living” starring Jean Arthur and Edward Arnold. The Fontana was leased for the first 12 years of its life to Glenn Harper of Corona,‘one of the best known theatrical men in the Southland’.

The Fontana Mummers no longer reside at this location. They are currently performing at “Casa de la Nuevo” on the corner of Spring Street & Nuevo Avenue across from the Fontana Water Co. The address is: 8443 Nuevo Ave. Fontana, Ca. 92335.

This 1957 LA Times ad mentions a Belair Drive-In at the corner of Valley Blvd and Fontana. I’m not sure if they are referring to a Fontana Street or the city of Fontana. If anyone has heard of this drive-in, let me know:
http://tinyurl.com/2htkqj

I’m going to add it. Can you post that on the page after it comes up?

Thanks. It should show up later today.

The Fontana will officially open this weekend as a dinner/live performance theatre. The original art deco interior has been replaced by what could easily be called a Las Vegas show bar. The auditorium has been painted in garrish hot pink and purple colors. What might be left over wall artifacts from the original interior are hardly recognizable. Seating has been replaced by large dining tables. A sad end to this theatre.

Here is a photo from wikipedia:
http://tinyurl.com/4rd3jv

Two photos from 1/2009 of the Fontana can be seen on my Flickr page:
View link
View link

I saw a performance of “5 Guys Named Mo” at teh Fontana in 2008. The interior color palette is…eyecatching. Its a nicely intimate viewing space but I think for performance the stage has been built shallow, tho that could just be the designs of this shows set.

It was a well staged,wonderfully performed show. The dinner was quite good (if pricey) and while adding (?) a kitchen seems to have made the lobby oddly shaped they made good use of both. Sadly, the 2/3 empty audience my BF and I saw that night was typical of teh run ,according to the performers, and the foot chase and arrest by police of a couple guys in the parking lot as we left says a lot about the neighbrohood. Press at the time indicated that the city of Fontana was hoping to make the theater part of a downtown revival; bringing money and jobs to local businesses and residents by drawing audiences from teh suburbs. I hope some of that has happened for the sake of the theater and the city of Fontana.

A wise choice by management since then (Im on teh emailing list) has been to offer performances with a no meal option for a lower price as well as making teh space available to the community at large (schools, community theater groups etc).

I didnt get pics of the interior but heres a few showing the freestanding sign, the very cool exterior and a couple shots of teh lobby.
View link