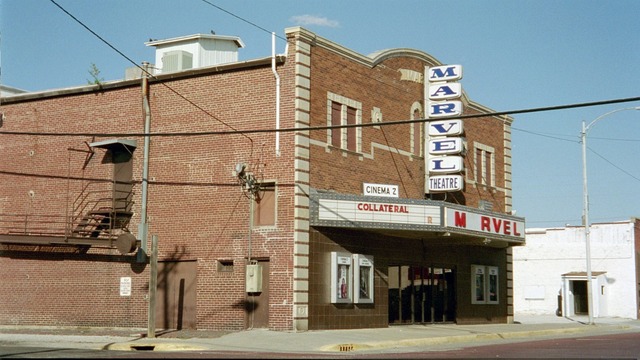 This theatre, in the heart of downtown Carlinville, along an historic stretch of the old Route 66, was built as a single-screen theatre, opening on August 26, 1920, by the Paul family. It didn’t last long as it burned down on December 18, 1926.

It was re-built and reopened on January 19, 1928 with “The Gay Retreat”. It was operated by the Frisina Amusement Co. during the early-1940’s.

The Marvel Cinema continued to operate as a first-run movie house until it closed February 27, 2014. It was reopened by Eisentraut Theatres.

Not a very colorful marquee. White with cheap red plastic letters stuck on. Pretty ugly, and not in keeping with the design of the building. The ‘A’ has fallen off the front of the horizontal portion. Lower portion of the facade has ugly brown tile stuck on it, and the windows on the second floor are covered with plywood which was painted brown, and is now warped and peeling.

The Marvel Theatre is alive and well. The $6.00 admission including popcorn and a drink is hard to beat.

Very nice looking theatre,best of luck.Thanks for a great picture.

The Marvel is no longr operated by Eisentraut Theatres. The theatre has a Faceook page but it does not list current or coming attractions.

The December 25, 1926, issue of The Reel Journalhad a story about the fire at the Marvel Theatre:

“TO INVESTIGATE SHOW FIRE IN CARLINVILLE

“The Illinois State Fire Marshall’s office will probably conduct an investigation into the fire which destroyed the Marvel Theatre in Carlinville, Ill., on December 18. The loss was placed at $60,000.

“It is suspected that the fire was of incendiary origin. Three years ago an attempt was made to set a fire to the theatre but the blaze was discovered before it could do serious damage.

“The Marvel owned and operated by Mrs. Freda Paul was supposedly of fireproof construction and was one of the finest theatres in that section of Illinois. It seated about 900 persons.

“Mrs. Paul plans to re-open her Grand Theatre until such time as the Marvel can be reconstructed.”

The Marvel Cinema in Carlinville ran its last movies on February 27, 2014, according to an article in the Macoupin County-Carlinville Daily Enquirer-Democrat of March 6 that year. The last operator, Dougherty Theatres, made the decision to close the house as it was unable to pay for operations and upkeep with the level of patronage the theater was getting. The Paul family still owns the Marvel building, and it might be sold or leased at some future date.

Daugherty, which operates theaters in Jerseyville and Litchfield, plans an expansion of their two-screen Stadium Theatre in Jerseyville. The Marvel was remodeled by Dougherty Theatres in 2011, and digital equipment was installed, but the equipment might belong to Dougherty Theatres. If it does, I’d expect it to be removed to be used in the new Jerseyville auditorium, which would reduce the already slim likelihood of the Marvel ever reopening.

The Paul Family is selling the Marvel. Listed on E-bay for $169,000. Both screens are converted to digital.