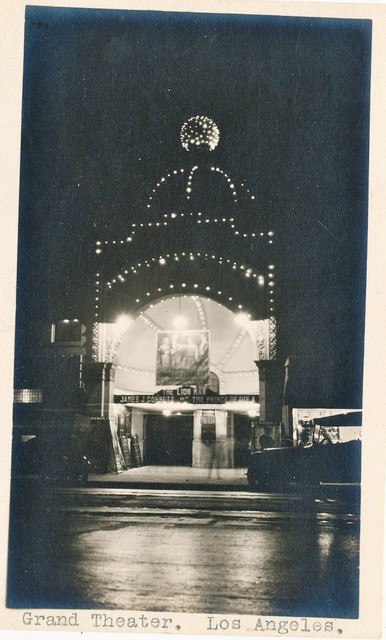 Jensen’s Theatorium was located in the Echo Park area in Los Angeles. It opened in 1912. By 1914 it was known as the Wood Theatre. It was later renamed Globe Theatre No. 3. Later named changes were Sunset Theatre, followed by Hollyway Theatre and finally Holly Theatre.

It had closed by the 1950’s and was converted into a branch of the Citizen’s Bank. For many years it housed the Gualupana Market, catering to the Mexican population. It was across the road from the old Pioneer Market building.

I have fond memories of the Holly Theatre circa 1944, on Sunset near Echo Park Boulevard. I went everything Saturday matinee with the quarter my aunt gave me for the day. Nine cents for a ticket, a nickel carfare each way on the Echo Park red streetcar line, a nickel for JuJubes (which lasted through at least two feature films), and a penny left over for a piece of Fleers imitation Dubble-Bubble gum
(For Big Time, I would escalate the experience by going to the Ramona Theatre some blocks away.)
Where are the days of yesteryear?

Actually, when this theater first opened it was called the Globe #3. Here’s an article from April 7, 1912 about it:

I guess for a time it was also called Sunset:

Here’s an excerpt from someone at the Echo Park Historical Society on this page: View link

“In its earliest years, the Ramona was one of two Echo Park theaters. The other stood at 1624 Sunset Blvd and now houses the Gualupana Market, across from the old Pioneer Market building. It started as the Globe Theater in 1912 and later became the Hollyway Theater. By the 1950s, the Hollyway had been converted into a branch of Citizen’s Bank. —EPHS”

I searched through the movie listings in the LA Times and the name changed from Hollyway (or Holly-Way) to the shortened Holly on Sept. 29, 1941. I haven’t seen anything about Jensen’s Theaterium. It’s pretty consistent in the listings as The Globe #3 for a very short time and then The Sunset until the mid-20’s. Then it’s the Hollyway until the date above.

Here’s the article about the conversion to the bank:

It’s very strange that there is no mention of a Henty Jensen or any Jensen’s theater or theatre or theaterium in the LA Times. Is there some source somewhere that mentions those names? I’m curious.

It’s Henry, not Henty, Jensen. Still, the California Index at the L.A. Library’s web site has only one card citing a Times article naming Henry Jensen, and that’s an article from June 21, 1914, about the Palace Grand Theatre in Glendale. All the other cards mentioning Jensen cite articles in Southwest Builder & Contractor or other publications. The name Theaterium does not appear in the Index at all.

The first aka should be Jensen’s Theatorium, not Theatrium. The aka’s Globe Theatre and Sunset Theatre also need to be added (links of September 22, 2009, from jeff bridges.)

The Globe circuit didn’t last very long, but the downtown Globe was in operation at least as late as 1919, and the Globe on Central Avenue (later to become the Florence Mills Theatre) was being listed as the Amusu Theatre by 1923.

The Holly Theatre was located in one of the rare areas where the Google camera truck recorded the alleys as well as the streets. Pan Street View to the right and go to the corner of Logan Street. Turn left on Logan and go south to the alley, and turn left again. The former theater has a religious painting on its back wall— probably depicting Our Lady of Guadalupe, a common icon in Mexican American neighborhoods.

En route, the three-story brick building you’ll see at the southwest corner of Sunset and Logan is another of Henry Jensen’s projects; Jensen’s Recreation Center, built in 1924.