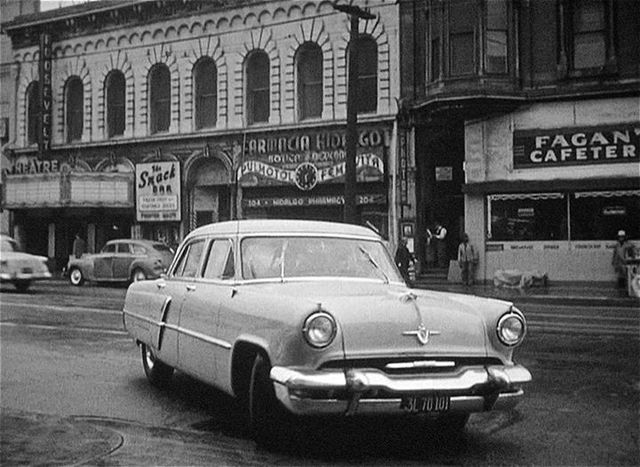 Here is an item from Boxoffice magazine, May 1950:

Lou Goldstein, former film salesman connected at various times with several of the independent exchanges here, has leased the Roosevelt Theater on North Main Street from Max Gardens and will book Chinese language films into the house.

The Electric Theatre was already listed at 212 N. Main Street in the 1915 L.A. City Directory. Since the building is gone I have no way of finding out how old it was at that time.

The urls of the photos from the USC Archive have been changed yet again since the last time I linked to them. The L.A. Library may misidentify more of its photos than USC does, but at least the library’s urls are stable. I wish they’d both get Flickr accounts.

Here’s the ca.1935 photo with the theater in the distance.

Here is the 1936 photo with a fairly decent view of the marquee.

There’s a photo dated 1930 at the State Library showing part of the theater at right, and there was no marquee yet. The marquee was probably added when it became the Roosevelt.

There is a brief scene at the end of the 1954 release Crime Wave, with Sterling Hayden, in which the theatre exterior is clearly visible.

The theater is about mid block on the right in this late 30s photo from the USC archive:
http://tinyurl.com/cv2xyd

The building the Roosevelt would later occupy part of was already there in 1882, if the L.A. Library has this photo dated properly.

Wait, not that one. This one, which is a drawing of the block, undated, but from the 19th century.

The pin icon on the Google Map is too far south. The Roosevelt Theatre was farther north, on the east side of the street. The extension of Temple Street east of Main crosses the site of the theater. It was about where the street’s eastbound lanes and southern sidewalk now are.

Hi. Lou Goldstein’s booking Chinese-language films into the Roosevelt (above) intrigues me. What happened to the actual prints? On a European “lost films” site, I posted nine Chinese-American movie titles, all involving ESTHER ENG (Ng Kam-ha – see www.estherengstory.com). Having long written about her, and with a future film on her in view, I have many of her papers and photos – including a program leaflet, date uncertain, for the same Roosevelt Theatre. She did distribute Chinese movies in the 1940s/50s – some maybe stored long ago in the Roosevelt’s vaults? Thanks for any interest.

This reopened as the Electrico on November 29th. 1933 showing movies in Spanish.