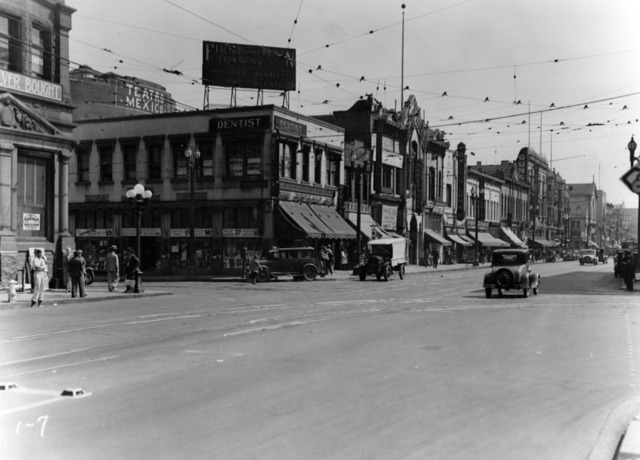 It is likely that few now living have any memory of this long-vanished theater. Opened in 1884, as Childs' Opera House, this theater was at the time the largest yet built in the growing city of Los Angeles. It was built by local entrepreneur and real estate man Ozro W. Childs, one of the city’s most successful developers.

The building was typical of large theaters in the late 19th century, designed in an eclectic Victorian style combining elements of Classicism, the Gothic, and "artistic" decoration, and all the modern conveniences, including gas lights. The auditorium featured a good-sized balcony, and side boxes, and the lobby and lounges were appointed in the latest fashions as dictated by the larger cities of the east.

Operas, plays, and musical performers all appeared on the stage of the Grand, including, in 1887, the famous Edwin Booth. However, perhaps the most significant fact of the theater’s history for Angelenos is that, in December of 1894, it became the first Los Angeles home of the Orpheum Vaudeville Circuit. The Orpheum’s performers trod the boards of the Grand until 1903, when the circuit moved its local operations to the former Los Angeles Theater on Spring Street.

As the theater district of Los Angeles shifted south and west, and larger, more modern theaters such as the Burbank, the Hippodrome and, in 1905, the new Mason Opera House on Broadway opened, the fortunes of the Grand Theater declined. By 1910, it had become a movie house, and by 1920, second run movies were being shown for an admission price of ten cents.

In its later years, the Grand Theater found some success with programs of Spanish language movies and presented popular Mexican vaudeville acts for the growing Spanish speaking population of the city. But, as the prosperous 1920’s faded into the deepening depression of the 1930’s, the old house once again fell on hard times. In 1936 it was operating as the Grand International Theatre screening foreign movies and the long and varied career of the Grand Theater came to an end, and shortly after being closed, the theater was demolished.

I was lucky to stumble upon a brief biography of the elder Octavius Morgan, which reveled his connection to Keysor and to the Grand. It turns out that Morgan was quite young when he became Keysor’s partner. He was born in Canterbury in 1850 (no date given, unfortunately) and studied architecture in England (no indication of exactly where) before emigrating to the United States in 1871. He was in Denver two years before moving to Los Angeles, so he must have been 23. Keysor was born in 1835, and thus quite a bit older than his new business partner.

Also, the L.A. Library’s California Index claims that “Keysor” is an erroneous spelling, and his name is actually spelled “Kysor”. They attribute the error to Harold Kirker’s 1960 book, “California’s Architectural Frontier”, published by the Huntington Library, no less. However, the Keysor spelling is used in my source, “An Illustrated History of Los Angeles County, California” which was published in Chicago in 1889.

I suppose the library is most likely to be correct, and the index does have multiple references using Ezra “Kysor” and only two using Ezra “Keysor”, one of which is the correction itself. Still, I’ve seen mistakes in the index before. And the Huntington, after all, is the Huntington. I wish the smart people would agree on these things.

After staring at the photos in the photo links above (at least the ones that still work, so I’m not counting the USC ones) for way too long, I’d say that these two are the oldest:
View link (this is the one dated 1890)
http://jpg2.lapl.org/pics09/00014009.jpg

Note the 6-row electric (?) lines strung across the front of the unpaved street, and the derrick-like tower on top of the building to the left,

The poles out front have disappeared, and now there’s a short single streetlamp in front, the awning on the right has been bisected for a small newsstand (?) with a round clock shape, probably painted on the awning, and the building to the right is painted black, and it looks like the entrance is framed with incandescent lights.

It’s now just “The Grand,” the single streetlamp has been upgraded to one with multiple globes, the 10Â¢ sign has been added, as well as more lights around the theater and store entrances, but the building next door is still painted black.

The multi-globed streetlights are still there, but the building to the right is no longer black, and has a big “Money to Loan” sign in front with a pointing finger logo. The building to the left now has a squared shape on top instead of its old rounded shape

The building to the right has been “modernized,” stripping off its Victorian ornamentation while keeping its pointing finger logo with its address (?) of 118, and the short multi-globed streetlight is still out front.

Notice that the short, multi-globed streetlamps have now been replaced by tall ones with two globes on that block, but not on the adjacent corner on the left, and the marquee has been completely sheared off to make room for a large blade sign.

The pawn shop next door is still the same and looks to be doing great business, but the Grand’s brand new blade sign is now gone again, leaving a makeshift marquee. And so goes the Grand.

WDL: If you are still interested, I have some information on the Spanish-language theatres in LA from the 20s and 30s. I’m writing a book on the subject. Feel free to contact me: .edu

Hello all. According to the Pacific Coast Shoman (an exhibitor’s trade paper in the 1930s), the Grand Theatre became the Teatro Mexico at some point in the 1930s. In 1934-1935, it changed hands from the Gore Bros. to Frank Fouce who demolished it in order to draw business to his other Spanish-language theatres.

The Orpheum in L.A. is listed in the 1897-98 edition of the Julius Cahn Official Theatrical Guide. As usual, there are no street addresses in this Guide. And there isn’t much info. The Mgr. was Charles Schimpf. Ticket prices ranged from 10 cents to 50 cents, and these low prices indicate that it was not featuring touring plays, musicals, opera, and was, indeed, a vaude house. The seating capacity was listed as 1,500. The proscenium opening was 31 feet square. There were 7 members of the house orchestra.

Here’s the new URL of the 1889 USC photo, which is a bit larger and clearer than the LAPL version of it.
View link

The caption says:
“Photograph of Main Street looking north from Second Street, ca.1889. The Childs Opera House is on the right, built 1883 and opened May 1884. Beyond it the bell tower is atop the headquarters of the Confidence Engine Company, a volunteer organization which was formed in 1874 — Headquarters 7 Reg. N.G.C. formed May 1888. The Opera Restaurant is at left. The Chamber of Commerce hat its second quarters in the room above the restaurant. The new U.S. Hotel is in the distance. A cannon is visible on the parapet at left. Streetcars and numerous horse-drawn wagons and carriages move up and down the dirt street or are parked along the curb. Additional legible writing includes: …"real estate”…, …“paints”…, “Castr[…], wholesale, retail grocers”, “Signs”, “harness”…, “Finest California wines”, “The Kline Clothing Co.”, …“Inglewood Property”…, “Grand Opera House”, …“House Jewelry Store”."

A book published in 1892 called “The Bay of San Francisco” has a few paragraphs about Chicago theater architect J.M. Wood, who had designed the New California Theatre in San Francisco. It lists several of the theaters he designed, and the Grand Opera House in Los Angeles is among them.

As Keysor and Morgan had never designed a big theater, it seems likely that Ozro Childs would have wanted to have an established theater architect working with the local firm on such a major project. James M. Wood should be added to the list of architects for the Grand. It was not unusual for Wood to design theaters in buildings that were designed by other architects.

Wood later worked on the Burbank Theatre, a few blocks down Main Street in Los Angeles, and the Loring Opera House (Golden State Theatre) in Riverside, California. “The Bay of San Francisco” lists twenty theaters that had been designed by Wood as of 1892, and the list is not exhaustive.

An article about architect Sydney Lovell in the summer, 2003, issue of Marquee, by Barbara Coy Janssens, says that Lovell was working in partnership with James Wood when, in 1888, Wood received a commission to remodel the Grand Opera House. The project was completed in 1890.

As the house was only four years old when Wood was commissioned to remodel it, it seems likely that he, already noted as a theater architect, was brought in to correct shortcomings of the original design by Kysor and Morgan, who were not experienced in theater design.

I would imagine that most of Wood and Lovell’s work on the building had to do with the practical aspects of theater design, and focused on the stage facilities. Photos over the years don’t indicate any significant change in the style of the building, inside or out. It’s likely that the original gas lighting system was either replaced by or augmented with electric lighting as part of this project.