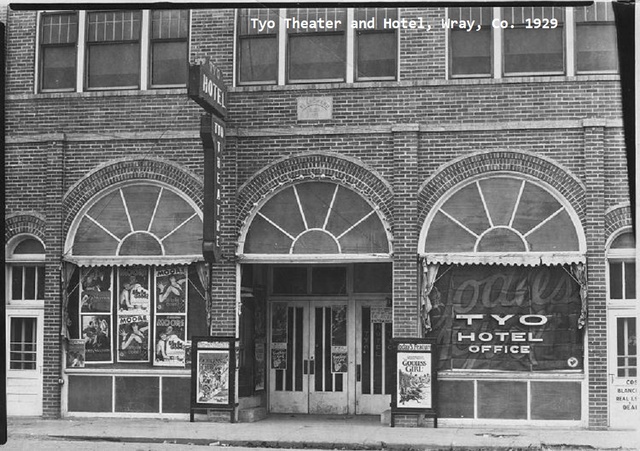 Opened as the Tyo Theatre around 1920. It was listed in Film Daily Yearbooks until 1943. By 1950 it had been renamed Wray Theatre and was closed. It was demolished in 1959.

Here is the obituary for Mrs. Blanche A. Tyo who owned and operated the theatre from about 1921-1932

Funeral services for Mrs. Blanche A. Tyo, widely known Wray business woman, who died suddenly at the home of her daughter, Mrs. J. H. Kearns, in Wray last Thursday morning, were held from the Kearns home Saturday afternoon and hundreds paid their final respects to this unusual woman who had been an outstanding figure in the business life of Wray for the past thirteen years. Rev. C. E. Powell, pastor of the Presbyterian church, where Mrs. Tyo attended services gave the funeral address. A great quantity of flowers attested to the respect that her business and social contacts had won her in the community.

Mrs. Tyo came to Wray thirteen years ago to operate the Tyo theatre and hotel in the Blanchard building which had just been completed. She continued to operate these businesses until about two years ago when she gave up her lease on the building following the death of her son, Stuart. She also acquired the management of the Commercial hotel in Wray and inaugurated the Tyo coffee shop as part of the hotel service. She was still operating the Commercial hotel at the time of her death.

Blanche A. Tyo, daughter of Osro and Mary Towner, was born in Northeast, Penn., March 10, 1872. She departed this life March 15, 1934, at the age of 62 years and five days. She was preceeded in death by her father and mother and two brothers. At the age of 18, she was married to Daniel A. Tyo of Fort Covington, N.Y. To this union two children were born, one son, Stuart L. who preceded his mother in death on June 27, 1932 and a daughter, Mrs. J. H. Kearns of Wray, Colo. Besides her daughter, she is survived by four grandchildren, John T., Richard K., Lee M., and Betty B. Kearns.

Stuart L. Tyo, Wray theatre man and widely known in this section, was found dead in his room adjoining the entrance to the Tyo Theatre in the Tyo hotel in Wral Monday evening. The discovery of Mr. Tyo was made at about fifteen minutes to nine that evening when his mother, Mrs. B. A. Tyo, sent Mrs. Bill Foster, wife of the operator of the Tyo, to call him. Mrs. Tyo had become alarmed at the fact that he had not been up that day. Mr. Tyo was in bed and had apparently passed away in while asleep. There was no indication that he had suffered. A physician was called and death was pronounced due to heart failure. There had been no indication that Mr. Tyo had not been in good health, and his death came as a shock to his family and friends.

Funeral services were held from the J. H. Kearns residence in Wray on Wednesday at 2 o'clock, with Dr. C. E. Powell in charge of the services. The American Legion had charge of the burial service at Grandview cemetery.

Stuart L. Tyo was born on July 10, 1891, at Fort Covington, N. Y. and passed away at Wray, Colo., on June 27, 1932, age 40 years, 11 months and 17 days. His father died when he was but a youngster and he came to Denver, Colo., with his mother and sister. On May 10, 1918, he enlisted with the 8th Infantry and served in the U.S. Army until he was honorably discharged on July 24, 1919. He was eight months of service in France during that time. He came to Wray with his mother in 1921 and was associated with her in the hotel and theatre business here since that time. He is survived by his mother, Mrs. Blanche A. Tyo, by his sister, Mrs. J. H. Kearns; three nehews, Jack Dick and Lee Kearns and a neice Betty Kearns, besides and uncle Joseph Tyo and an anut, Mrs. Larry Lynch, of Fort Covington, N. Y.

He was widely known through his hotel and theatre activities. He posessed a generous and friendly nature that made him many friends to whom his passing will be a regrettable shock.

The sympathy of many friends is extended to the bereaved family. ( Note: Spelled per the original. )

COSIE AND MYRTLE BLANCHARD When Cosie and Myrtle Blanchard. citizens of Eagle. Cass County. Nebraska, were married in 1902. land in that part ot the country was becoming hard to obtain. They therefore decided to follow the time-honored practice and go west. They arrived in Wray. Colorado, on the seventh day of November, 1904, and moved to a homestead, eleven miles southwest of Vernon. Cosie had previously bought the preemption rights of Fritz Schlodrick. Their home was a one-room rock house that had been built by Mr. Schlodrick. One quarter of land and a few cattle that were pastured on free range did not furnish the best of living; so they sold out and moved to Wray in 1908. Cosie bought a livery barn on the north-east corner of Second and Main Streets and a house across the alley on Second Street. It was in this house that their two daughters, Geneva Jo and Juanita L. were born. Being in the livery business, Cosie was often called on to take newcomers to look at land that was for sale; thus he became interested in the real-estate business. In 1910 he entered into partnership with W. C. Proctor and devoted most of his time to the real-estate business. He owned various other businesses, including a confec- tionery in Wray and a drug store in Vernon. He devoted the rest of his life to selling and developing real-estate. In 1920 he built the theatre and hotel building on Third Street, first known as the Tyo Theatre and Hotel, but later as the Wray Theatre and the Blanchard Hotel. Through the years Cosie Blanchard became a highly-respected citizen of the area. He was a friend to all who knew him and a man, generous with both his time and money. Many a person in need when attending a farm sale found himself taking home a horse or a cow paid for by Cosie Blanchard. Some paid him back, many did not. Cosie Blanchard passed away on April 16, 1927 at the early age of forty-eight years. Myrtle Anna Blanchard, Cosie’s partner in all enterprises, was a very industrious and strong-willed person. She was an expert seamstress, having been taught by her father, a tailor from Berlin, Germany, area. She was a dressmaker for many years for a large number of the female population of the Wray Community. In 1932, during the depression, when many businesses were failing, she took over the management of the Blanchard Hotel and by determination and hard work soon had it on a paying basis. On April 21, 1943, she was married to Ivan Ashlock. She operated the hotel until 1945 when she retired. Mr. Ashlock died in June, 1966; and Myrtle, on August 2, 1974, at the age of 84. We of the family feel a great debt of gratitude not only to Cosie and Myrtle Blanchard but to all those whose courage, sacrifices, and toil made this section of the High Plains the best place on earth to live. By Ward A. Tomlinson. A HISTORY OF EAST YUMA COUNTY This is a collection of general history and family histories of East Yuma County from 1868 through 1978.

An obituary for James K. “Kenny” Powell ran in the March 3, 1975. He got his start as a school boy operating a movie house in Palisade, Neb. until 1933 when he opened the Wray Theatre with partner Jim Hughes. They opened the Cliff in 1950 and sold it to Sam Amandola in 1969.

This venue opened as the Wray Theatre. It was taken on not long thereafter by Blanche M. Tyo who changed the name of the venue and the hotel to the Tyo Theatre and the Tyo Hotel. The theatre converted to Western Electric sound in 1929 to remain viable. Tyo sold the theatre to Myrtle Blanchard and a person with the last name of Tomlinson in August of 1932. The pair changed the name to the Blanchard Theatre.

Blanchard then sold the theatre to James K. Powell effective June 29, 1933 when Powell showed “Melody Cruise.” One month later, Powell changed the theatre back to the Wray Theatre. If the newspaper is correct, the hotel was also renamed as the Wray Hotel under new operators in 1934. The final advertisements appear for the Wray Theatre in 1950 which coincides with the end of a 30- year leasing period. It appears that both the hotel and the theatre were demolished in 1959. And if they weren’t, my apologies to the Tyo family.