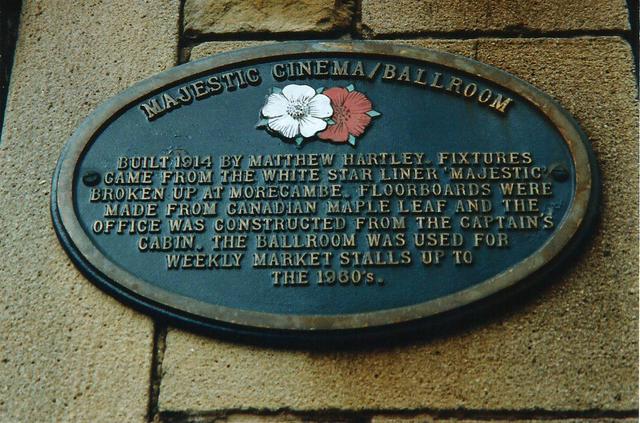 In the Yorkshire town of Barnoldswick, to the north of Burnley, there is a useful heritage plaque on the surviving frontage of the former Majestic Picture House.

This tells us that the Majestic Picture House was opened in 1914 by Matthew Hartley. Fixtures came from the White Star line ‘Majestic’ which had been broken up at Morecambe. There was also a ballroom, the floor boards for which were made from Canadian maple leaf. An office was constructed from the liner’s captain’s cabin.

The ballroom was used for weekly markets up to the 1960’s.

The Majestic Picture House closed on 2nd March 1980. The auditorium has since been demolished, while the foyer space has been converted to shops. (Shops were always part of the fabric of the building, with the cinema entrance being flanked by two shops).