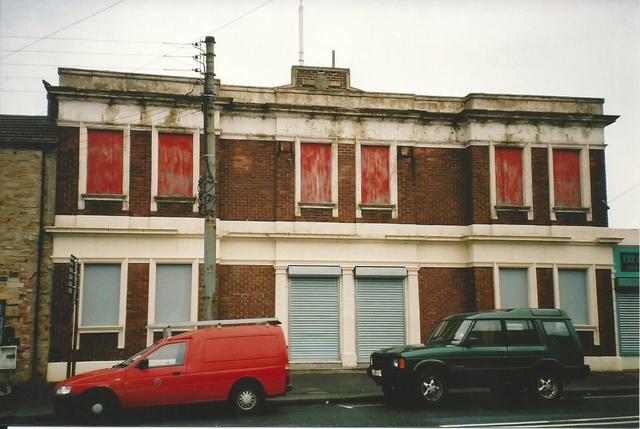 In the small County Durham town of Leadgate, adjacent to Consett, the Roxy Cinema opened in 1938. It was owned by Consett Cinemas Ltd., had a proscenium 26ft wide and two dressing rooms. It was equipped with a Western Electric(WE) sound system.

It is not known when it closed. (It was still listed in the 1954 Kinematograph Year Book but had gone from listings by 1963.)

When I visited, in October 2005, the cinema appeared to be closed up, but a sandwich bar, in a kiosk attached to the cinema, and appropriately called The Roxy Shop, was listed as being open (though shuttered up when I called by).

An article in the Northern Echo in May 2011 said that Keith and Karen Barnes, who owned the Roxy Cinema, and ran the sandwich shop, were spending lots of time and money to convert the premises into a non-profit making children’s theatre for the local community, with a capacity of 360. Mr Barnes, a builder by trade, had done a lot of the work in his spare time, installing a stage, an upper circle and an orchestra pit. However, the couple were devastated after discovering that there had been a break-in over the weekend of 14th to 15th May. As well as stripping lead from the roof, the thieves broke a large number of tiles, leaving around £1,000 of damage. The only insurance the couple had was for an empty building in case of fire.

Mr Barnes said he had spent five years working on the project, and it would have been at least another five before it was complete.

Karen Barnes comes from an amateur dramatic background, having worked as a costumer. Their son David is an actor, the other, Ian, works in the music industry while their daughter Sarah is also a keen performer.

Mr Barnes added “This theft has not deterred us. We are determined to make this theatre work but it has left a nasty taste in the mouth”.

It is unclear how far, if at all, this interesting project has progressed since then.