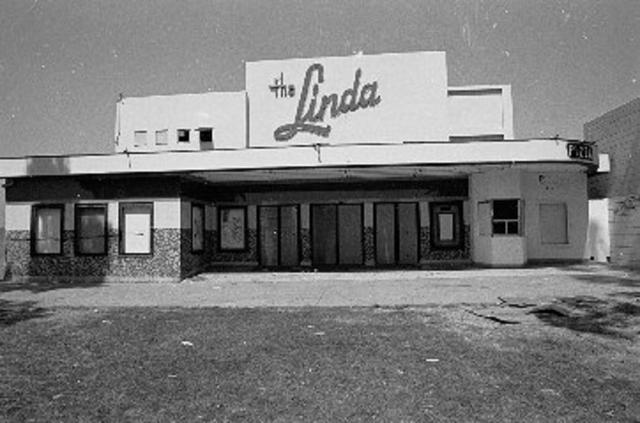 This theatre was located in the original Linda Vista Shopping Mall, which was on just one of the many World War II-era Military Housing projects in San Diego, built in the 1940’s. By 1957 it was operated by Aladdin Enterpises. In the 1950’s and 1960’s it was on the Saturday Afternoon Kiddie-Matinee Circuit. I don’t remember it as having any style at all, It seemed to be just plain; a big box with seats and a screen!(…and of course, the projection booth!)

The Linda Theatre’s location in a planned shopping center built in 1943 (I believe the theater opened a bit later) made it one of the earliest shopping center theaters in the United States. Linda Vista Plaza was a Federal government project influenced by the ideas of Britain’s New Towns movement, and originally featured a greensward down the middle and a large building that served as a multi-=purpose community activities center.

The activities center appears to be the only original structure remaining in the center, and today has been re-purposed as a skating rink, Great Skate of San Diego, and a couple of ancillary businesses. The Linda Theatre was located a couple hundred feet north of that building, with its back facing Linda Vista Road and its entrance facing the communal green. It had a small stage, but no fly loft, the roof of the stage house actually being lower than that of the auditorium.

This page from the City of San Diego has two aerial views of the Plaza, one of which clearly shows the theater and its relationship to the Community Activities Building. Comparing it to modern Google satellite view it can be seen that the back of the theater was about where the rebuilt shopping center’s entrance sign and an adjacent fast food structure are now located.

Plain though the Linda Theatre was, it still had an architectural style, which was a combination of elements of the Streamline Modern and the emerging Midcentury Modern.

Maybe be a simple box, but it is a “modern” box!