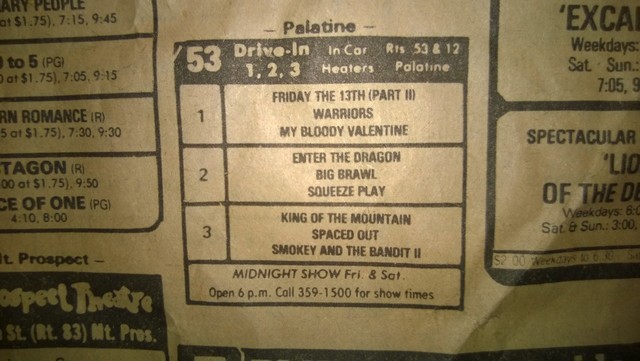 One of the more popular of the suburban Chicago-area drive-in theaters, the 53 Outdoor Theatre originally opened in 1960 with a single screen and a capacity from 765 cars. Opening movies were Van Johnson in “Subway in the Sky” & Yul Brynner in “Solomon and Sheba”. It was located near Route 12 and Route 53 in the northwestern suburb of Palatine.

It closed in 1986 and was demolished a year later to make way for a UPS shipping facility.

There was an article about the 53 Drive-In, June 1960, from Boxoffice magazine:
http://tinyurl.com/yagbgqr

My friends and I saw Purple Rain at the 53 Drive-in. What a hoot, a carload of girls in a Firebird watching Prince. Can you imagine? Tinny little drive-in speaker hanging on the window for a music concert movie! We had big hair, big shoulder pads, and thought we were So Cool.

This opened on April 29th, 1960. I uploaded an aerial and grand opening ad here.

Wow….just found this site and had to post. I am 49 now and grew up in Palatine. I remember going there with my parents and younger sister as a kid and the playground under the big screen. Went there with friends and dates in high school and we drank beer, acted stupid etc. While in college, I was an employee there for three Summers (1981-1983) and at one time or another worked all areas of the theater. I helped maintain the speakers and sound systems, helped with security, worked in concessions, did grounds keeping, box office cahier, changed the marquee with the new movies at the front entrance and ended up the latter part of my last Summer as an Asst. Manager. Poppy Kohlberg was the adult offspring (in her early 40s at the time) of the owner/founder, who I never did meet. Poppy ran and managed the theater in the 80s and her brother ran the projectors. I met and worked with a lot of interesting people who I have long since lost touch with.

Also, there is a group on Face Book for the 53 Drive In which can easily be found with a FB search. I commented there about four or five months ago, but not much activity. Also, the picture on the FB site could be the only known surviving picture of the place. They were asking for more pics from potential contributors on the FB site, but that seems to be it. I never took any while working there and now wish I had. Kind of sad really, since it was a landmark and an icon from 1960 through 1986. Now it is a UPS shipping center. There is nothing on the location where it once stood to suggest it ever even existed. A lot of good memories though.

My first job was at the 53 Drive-In Theatre. I would get there in late afternoon and me and a couple of the guys would walk around the grounds with big plastic trash cans and pick up the “stuff” left on the grounds from the night before. Hehehe, you can image what we found and how we learned about life! Then it was back to the snack bar and start popping the corn to put in the heat racks and we even served hot dogs and pizza, which I helped make in the small oven we had. It was a unique experience both as a job and as a customer when we went in my parents car.

I think I spent every Saturday night the summers of 1980 and 1981 at the 53 drive-in. These were some good times, The midnight adult movies were fun as they charged $1.00 per car for these shows, when you were under age you just turned your head and handed the dollar out the car window.

FYI this drive in might have been closed but it was not demolished in 1987. Two screens, all buildings and all the ramps are very visible in 1988 aerials.

Opened with a cartoon(not named), “Subway in the sky”, and “Solomon and Sheba”.

The May 2, 1962 issue of Motion Picture Exhibitor printed a letter from the president of the Chicagoland Drive-In Theatre Association accusing the 53 Drive-In (and the nearby Starlite) of booking up to five features on a program and then skipping a reel or two of each. I have no idea whether that was ever true, and I’d never heard of that practice until I read that letter today.