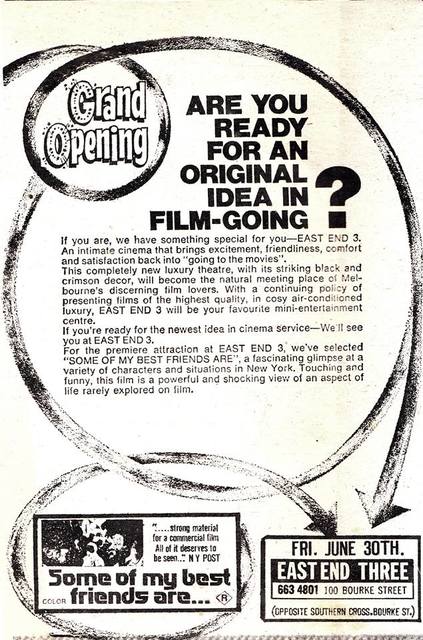 A conversion of the former Tye department store. The My Fair Lady Theatre was opened by Village Theatres on December 9, 1962 with the Melbourne premiere of “My Fair Lady” starring Audrey Hepburn. It was a 70mm roadshow house. “My Fair Lady” ran for 21 months. The next presentation was Elizabeth Taylor & Richard Burton in “Who’s Afraid of Virginia Woolf” in September 1964 when the cinema was re-named Palladium Theatre.

This configuration was later changed by swapping cinema 2 to cinema 3, and cinema 3 to cinema 2. The 3-screens were closed in 1980. It was demolished in June 1988.

The site is now a private investigator firm(Australian Civil Investigators.

Has anyone by any chance found any pics of the Palladium they could post?

Cinema 3 (the former Embassy cinema) suffered a bad reputation from day one, but in fact was a perfectly serviceable house. Given todays seating, the original capacity of approx. 400 would today be considered quite large. One of the main complaints was the entrance to the auditorium at screen end, but double sets of black-out curtains never seemed to be a major concern to me. A very early Espresso Bar in the foyer was a major attraction for the “hip” early 60’s audience it attracted with many important foreign films of the era, e.g. I Vitteloni, Woman Of The Dunes, Umbrellas Of Cherbourg, 81/2 and many other European and British hits. When all 3 cinemas came under corporate control the end was near. The former Embassy deserves much more acclaim for the product it introduced to many Melbourne film lovers.

The My Fair Lady Theatee, Palladium Theatre, and Embassy Theatre might have been seen in the Australian tv series “Saturday night at the movies”(available on dvd).