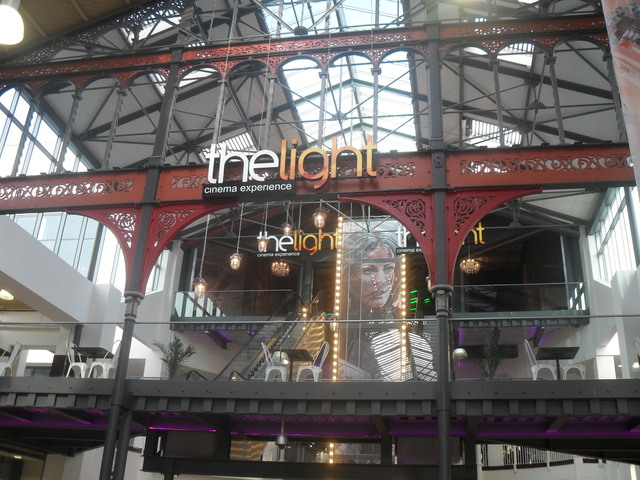 In the centre of Bolton, formerly in Lancashire, now part of Greater Manchester, the Market Hall opened in 1856.

It was extensively altered in 1984. As a modern retail space it was opened by HM The Queen on 1st December 1988.

After a major refurbishment, it was re-launched on 30th September 2008 by HRH The Earl of Wessex.

In 2014 it was announced that Light Cinemas would operate a multi-screen cinema that was to be built on the upper floor. This was to be operating by early-2015, but it did not open until 7th October 2016.

The cinema is in a commanding position overlooking the retail floors, reached by escalator and lift. A trademark of Light Cinemas is the Green Room café/bar.

The nine auditoriums, all fully licensed, are equipped with state of the art digital picture and sound facilities and VIP luxury seating. In typical Light decorative style, they are furnished with multi-coloured seating. Another nice Light innovation is the personal welcome given by a member of staff to the assembled patrons in the auditorium before each screening (which usefully reinforces the desperate plea to turn off mobile phones!).

The banner,above, declaring that this cinema is ‘OPEN’ is, sadly, incorrect. It was declared ‘Closed until further notice.’ on October 13th 2020. The whole of Bolton’s Market Hall saga has been a continual bone of contention between the citizens of the borough and it’s town council. In its original incarnation, as a typical Victorian, vaulted market, it was loved by all. The council, however, have sought to continually update the space, against much opposition. The first re-vamp was OK, in that some permanent stalls were installed instead of traders having to provide their own. There were also shop units added around the perimiter, with a range of attractions. It was a vibrant space. In the second revamp, fewer,fancier stalls were installed, but these were placed on the diagonal instead of being square with the building. It was now impossible to walk up and down the aisles. You had to zig-zag around the stalls. Footfall went down and many seasoned stall-holders pulled out. The third revamp began in 1984, (not 1894 as above) during which it was transformed from a Market Hall into yet another boring mall. Big high street names, like Marks and Spencer and Debenhams were offered inducements to open stores in the new mall, which opened Dec. 1988. After the novelty had worn off and footfall, once more, began to fall, most of the big names, including M&S, pulled out, leaving Debenhams to fly the flag. The place was really struggling! So a fourth revamp was planned, this time with the hope of attracting more people into the town centre in the evening. At night, Bolton had been, virtually, dead for some time. In order to limit the vast, unused areas of floor-space, a huge hole was opened up to give access to the disused cellars. Renamed The Vaults, it was hoped to attract trendy bistros etc. The retail units were redesigned, yet again, and in the multi-storey car-park, above Debenhams, it was proposed that much space be offered to ‘The Lights’ cinema chain. As described, above, the 9 screen, fully digital cinema was integrated into the building. Inside the current mall, which is as far removed from the original and much loved market as it’s possible to imagine, the new mezzanine, with lift and escalators, looks impressive. Externally it looks like a pimple on a cheese! To fill the cinema, patrons would need somewhere handy to park. But, oh-dear, the car-park now has a cinema parked in it!

As of November 2020, due to the Covid 19 outbreak, the cinema is closed ‘until further notice.’ The Lights group have stated that several of their outlets will not reopen after Covid. Many believe that the Bolton branch may be one of them. On top of this, Debenhams are in severe financial trouble and are saying that they are currently in a ‘light touch’ administration which is preparing to close 50 stores. Will Bolton’s be one of them? We will have to wait and see.