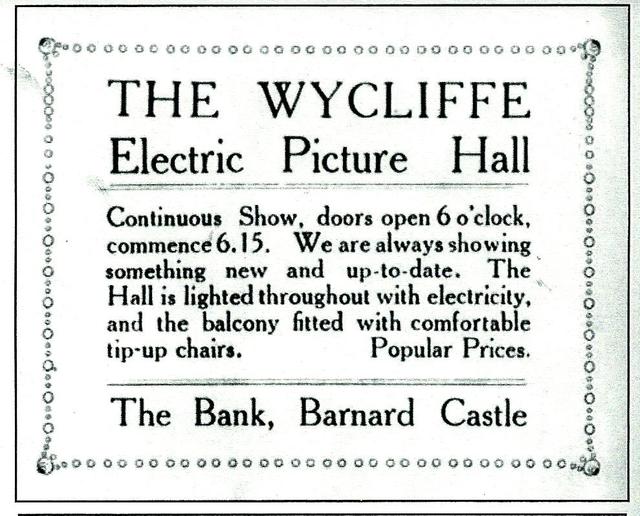 In Barnard Castle, County Durham, the Wycliffe Kinema is not listed in the 1914 Kinematograph Year Book, although it had opened by 1923 (see advert for the Napoleonic tragedy “A Royal Divorce”).

A further advert from the 1920’s, presumably predating that from 1923, is headed Wycliffe Electric Picture Hall, and proclaims continuous shows, commencing 6.15pm, and a balcony with “comfortable tip-up chairs”. (Both adverts give the cinema’s address as The Bank. I understand this is the former name for the area that is now the junction of Gray Lane and Priory Yard.)

The 1940 Kinematograph Year Book lists the Wycliffe Cinema as being owned by MBC Cinemas (proprietors of the town’s Scala Cinema and Victoria Hall Cinema).

The Wycliffe Cinema was not listed in the 1953 Kinematograph Year Book. At some time it was demolished; housing now stands on the site.