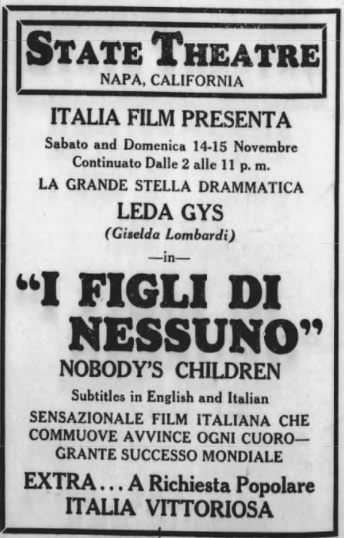 The State Theatre opened September 1, 1930, with Benny Rubin in “Hot Curves”, a baseball comedy. According to The Napa Daily Register, Julius Tocchini, son of A.H. Tocchini, was the manager and with 500 seats it would be the first new theatre built in the North Bay since the advent of sound and talkies. The Sanborn maps of 1910 show a very narrow Nickelodeon Theatre at this location.

In March 1931 a Da-Lite beaded screen, backed by new sound horns and damask drapes on the sidewalls, was installed to show the movie “Cimarron”. Just how successful was the State Theatre or even Napa movie-going in general during the depression? A story in the Register noted, “Cimarron” recorded 7,181 paid admissions (Adults .30 cents; Children .10 cents) for the first six days. With hundreds being turned away each night, its original five-day run was extended to a week. The population of Napa County in 1930 was about 23,000.

In May 1933, Fox West Coast Theatres abandoned the Fox Theatre, which opened up a new opportunity for the Tocchinis. According to the Weekly Calistogan, the Tocchinis signed a 15-year lease with Sam Gordon owner of the Fox building. They then had control of both Napa Theaters.

It was reported in January 1934 that A.H. Tocchini would be closing the State Theatre, a second-run house. Sadly, in September 1934 Julius Tocchini, most recently manager of the Fox theatre, died of pneumonia. Jake was only 26 years of age. The State Theatre however reopened in January 1935 with improvements to the sound and projection and the laying of new carpet. Unfortunately, unable to maintain a profit, it closed again in March 1935 but was open again in January 1936.

On March 13, 1938, The Napa Journal reported the State Theatre, which had been darkened for more than a year, would be remodeled into a Brunswick bowling alley. Later advertisements show The Napa Bowl at the location.

In 1973 the buildings on the east side of Main Street between 2nd and 3rd were demolished and today the Veterans Memorial Park occupies the site.