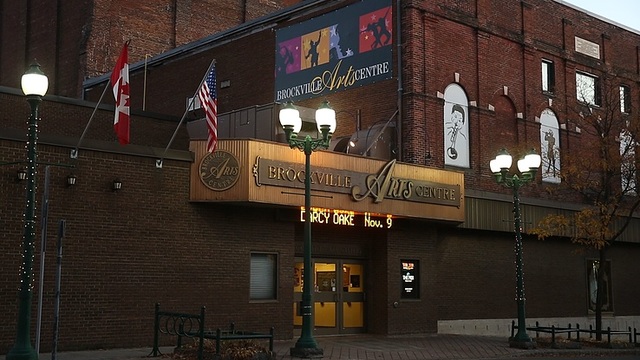 Originally built in 1858 as a town hall, market house & fire station. It 1880 it was converted into a theatre named Opera House (third largest stage in Canada at the time). In 1911 it eas remodeled to the plans of architect Andrew Stuart Allaster and renamed New Theatre. It was closed in 1929 and fire destroyed auditorium in 1937, stagehouse saved by fire curtain. Rebuilt as Regent Theatre (opened 1939), ran by Famous players until 1958.

In 1960 went back to being a live venue (Brockville Civic Auditorium), but still contains original carbon-arc projectors (change-over system) in perfect working condition, and a large movie screen which easily flys in and out. Name changed to Brockville Arts Centre in 1983.

It’s a pretty cool place. I just moved to this town Brockville, it’s very beautiful and historic here, with lots to discover. They play movies at the Arts Center twice a month. I didn’t know how old it was and all the details about it until I came across this neat website. I wonder if there’s ghosts there! But I know this is the only movie theatre Brockville ever had, and this summer they are building a 5 cinema movie theatre around the main new shopping area. The population of Brockville is 22 thousand. That’s all folks!

When I was growing up in Brockville, there were two cinemas on King Street. The Capital and the Regent. In the late 1950’s due to competition from television the Regent closed and by 1960 the town got it back for unpaid taxes.

Mr Kenneth Eland drove an effort to restore it as a community live theater rather than see it torn down. He drove a group of “volenteers” cleaning up the place. The asbestos fire curtain had saved the stage. The lighting panel was intact and many of the kleigh lights were still there. I am afraid that Robin Johnson is not correct in stating the orriginal projectors as being there. They wern’t. One of the service clubs donated a 16mm Bell and Howell unit which was used for many years until the modern system was installed.

In the 1970’s a reception hall and modern offices were added and more recently the seating area was rebuilt.

Yes Gord to me there are ghosts there. Whenever I am backstage I see Art Wood and his white German Shepard Dog talking to my father and Ken Eland decieding how best to restore the light and sound system, more than 50 years ago. If the needed a small boy to crawl into spaces too small for them the usually volenteered me,

The Regent Theatre was my introduction to Cinema. When I was 5 or 6, in the early 50’s, my father used to take me to the movies on Friday night. I especially liked the Regent because they showed a double feature usually of grade B Westerns. I figured that was a better deal because the Capital down the street showed only one movie. My father told me about the “serials” he used to see from the second balcony when he was younger. After the show we would trek accross the street to ‘Howison’s store’ where I was allowed to buy a bag of candy for a quarter. I was heart broken when the Regent closed but I’m glad to see the theatre still in use for live performances as well as the occasional flic.

This timeline at the Brockville Arts Centre’s official web site says that the building was erected in 1858 as a town hall, market house and fire station. In 1880 it was converted into a theater called the Opera House.

The 1911 expansion of the building, after which it reopened as the New Theatre, was designed by architect Andrew Stuart Allaster, who had opened an office in Brockville in 1909, according to his page of the Biographical Dictionary of Architects in Canada.

The timeline notes that the house was closed at the time of the 1937 fire, having gone dark in 1929 due to declining revenues.