I saw this a day after you posted it but am just getting back to it now.

This most directly confirms what I had heard about there having been a Wurlitzer organ. I see that it and some other details have now been included in my description that I submitted when I created this listing. : )

The opening night promotion sounds like an event I would have attended, but I missed it by 94 years… I can only pause and imagine what the Riviera Theatre experience may have been like when I walk through the western edge of the Sunset Place parking garage where the auditorium had approximately been. (Ironically the bottom of the opening night ad says “Plenty of Parking Space”.) 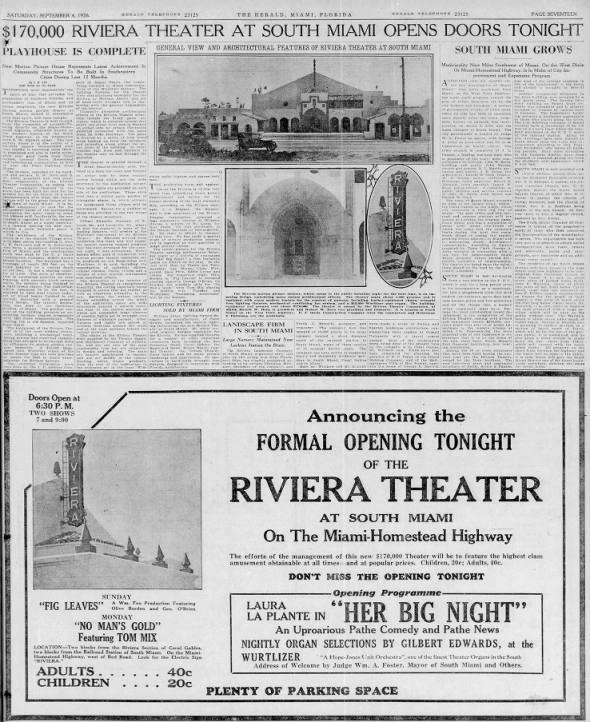 Click here to view a photo from the Miami-Dade Public Library’s Gleason Waite Romer collection of the Riviera with the Florida East Coast Railway tracks in the foreground.

Note if you click on the arrow button in the upper right corner you get an expanded photo with the ability to zoom in, (though the movie posters out front are not quite legible).

I’ve been waiting for this photo to be digitized since I first found it mentioned a couple years ago in the library’s listings then was shown the original negative when I asked about it at the Main Library.

This is the view passengers had while riding past on FEC trains that back then traveled all the way to Key West.

The road in the photo between the tracks and the theatre is US-1/South Dixie Highway, now expanded to 6 lanes, (and extended to Key West as 2 lanes). The tracks have been removed and the former FEC right-of-way is occupied by the county’s elevated Metrorail electric passenger train line that ends at Dadeland South.

If you were to stand under the Metrorail tracks across US-1 from the Sunset Place parking garage that now exists where this Riviera Theatre had been at the corner of SW 70th Street and US-1/South Dixie Highway, then gaze towards that corner, you would be standing about where the photographer was positioned in 1926.

(SW 70th Street becomes SW 58th Avenue just beyond the corner past Tire Kingdom. In Google Street View the address 5794 South Dixie Highway, South Miami, FL gives an image of the corner/parking garage where the Riviera had been.)

I recently came across this description, by Susan Perry Redding, of the Riviera Theatre and its interior, including the organ I’d thought I’d heard about, but also claiming the theater opened in 1926, on pages 110-111 in the “South Miami” chapter of the book “Miami’s Historic Neighborhoods: A History of Community”, edited by Becky Roper Matkov:

“The façade of the building had wide terraced steps and three arched entrances. The small archways on either side opened into stores, one occupied by Harold Dorn for his fruit crating and shipping business. The central arch opened into the theater, which had a gently sloping floor down to a cross aisle that led to side exits. The auditorium had padded seats for about 200 people. The exposed ceiling beams were painted in a vine motif. Unique floor tiles depicted various scenes in the story of Don Quixote and his squire, Sancho Panza. The pair appeared in nine oblong tiles and six square ones surrounded by a border of Moorish tiles in conventional design.

At the left of the auditorium, in front of the stage, was an imposing electric organ — the largest south of Atlanta — even larger than the Olympia’s in downtown Miami. Mr. Dorn had advertised for an organist in the northern papers, and the man he selected arrived two days before the opening of the theater. When he sat down to play, people from all over the town crowded the theater to listen. The theater opened on time, September 4th, 1926, with the premier of Universal Studios picture, “Her Big Night”, starring Laura LaPlante. The theater operated for about a year, until the boom went bust and the theater closed because no one could afford a twenty-five cent movie.”

Great photo and comments Dave. The Bakery Center deserved to be razed but the Dorn brothers'Riviera theater was a gem.

Btw, before 1927 South Miami was called Larkins, so old sources of information regarding the Riviera might list it under that town.

I remember there were a few artistic-looking perhaps Roman-like chunks of demolished Holsum Bakery architecture on display as a tribute on the floor of the lobby of the Bakery Centre shopping mall. Perhaps they had been part of the Riviera’s façade? They were removed by the time the Bakery Centre closed and I don’t know what became of them.

A Miami New Times article about historic buildings in the Miami area that were not saved mentions that the University of Miami School of Architecture suggested plans to incorporate the bakery into the design of the Bakery Centre, but that did not happen.

The Riviera appears in this Youtube video of “A Brief History of South Miami” beginning at 5:03.

In a photo of an overhead shot of the bakery property from February 7th, 1956 I found on page 126 in the South Miami chapter of the book “Coral Gables“ by Seth H. Bramson, the building that matches the former Riviera’s architecture looks to be at the northeast corner of SW 58th Avenue and South Dixie Highway with the rest of the bakery factory behind it. The building that is currently a Tire Kingdom car repair shop is to the right of the bakery/ex-Riviera across 58th in the photo but with a solid wall as the garage bays were yet to be installed.

On the South Miami page of a “Remembering Old Miami” blog, a person posting on March 10th, 2016 says they had worked for the Holsum bakery from 1967-1970 and “used to go and explore the attic area of the old theater section of the bakery back then. It still had a lot of stage props stored up there”. … This reminds me I once heard the Riviera had sometimes also hosted live performances.

I vaguely remember hearing a story about a nice organ that had been obtained to provide music for the Riviera that then didn’t get to be used due to the hurricane, though I don’t have the details or know for sure if this happened.

Some Dorn brothers buildings from the 1920’s still exist at the corner of South Dixie Highway and Sunset Drive, viewable on Google Street View at 5904 Sunset Drive. The City of South Miami declared them historic in August of 2005, and a bronze commemorative plaque placed on the east side facing SW 59th Avenue was unveiled in October of 2008.

In Homestead, the original small Fuchs Bakery building is at 102 South Krome Avenue and has been added to the National Register of Historic Places.

As I post this, I’m sitting in Barnes & Nobles Sunset Place, yards from where this Riviera once stood.