The Nakoma Village 8 had what would appear to be a fairly normal run for an unsuccessful cinema operating both as a first-run and, for a period, a sub-run discount theater in San Antonio. It was opened by Rand Theatres on May 24, 1989, but closed on October 26, 1989. It remained closed until it was taken over by Act III Theatres and reopened on February 1, 1991. It closed in September of 2000 struggling under three different operators. It closed as the the Regal Nakoma Village 8 and was unceremoniously demolished two years later likely to get the physical building off of the tax roll.

But the Nakoma has a very small distinction in movie exhibition history. It was the theatre that ended the curious ride of the infamous Rand Theatre Circuit of Little Rock. In the 1980’s, W.A. “Tony” Rand used an old theatre in his non-theatrical portfolio as a business scheme. He would acquire some other old theatres to create the Rand Theatre Circuit despite not having a background in the movie industry. He then convinced investor after investor that he was going to become one of the big five cinema exhibitors in the U.S. by building multiplexes in the late-1980’s. The multiplex boom was on so the business model seemed legitimate.

The opening of a Rand 13-screener in North Little Rock got some attention on the circuit’s way to more than 100 screens – and very quickly. Rand moved next to investors in Texas and New Mexico grabbing land and building nondescript and curiously-equipped theaters in Austin and Dallas Fort-Worth. Locations were often odd and tucked away. The Nakoma reflected that as being poorly situated with low visibility from major traffic arteries making it a bit challenging to get to especially in a pre-navigational device era.

The Nakoma Village project represented an even-more daunting challenge in that the Santikos Circuit was very well established in the marketplace. Rand was unknown in San Antonio and, bluntly, anywhere else outside of Little Rock, Arkansas. So Rand decided to use technological superiority to position his Nakoma 8 with 8 THX auditoriums.

As Rand was making deals and opening multiplexes elsewhere, the Nakoma problems became publicized nationally which would sink the Rands and seal the fate of the entire circuit. The first oddity was that the Nakoma 8 technically had zero THX certified auditoriums. The billing had certainly indicated the procurement of equipment for 8 THX-certified houses but only two had actual THX authorized equipment. THX certification of those two auditoriums was never granted because of rumblings of airplanes from the nearby airport.

Connections between Rand Theatre Circuit and its projection supplier were made suggesting odd financial dealings and over-hyped installation claims. Theatre seat origination and pricing was then examined raising eyebrows. Further scrutiny concerned how Rand could even being paying the rent at locations given cash flow versus liabilities. It turned out that he had been given rent-free months at the opening of the Nakoma multiplex as a perk. And that had occurred elsewhere, as well. The hope was that the box office and concession money would roll in for the summer film hits in the no rental fee period. But things got worse very rapidly for Rand especially at the Nakoma.

Rand was seen by the film companies as a slow pay and they also questioned his box office totals. Soon after, major film studios stopped the flow of films to the Rand Circuit. This left the non-THX THX auditoriums of the Nakoma with low-budget films that had little potential of drawing audiences let alone having dynamic audio mixes. Newspaper advertisements were removed likely due to non-payment. Without social media and the Internet and lacking high traffic attractor signage, the Nakoma was in deep trouble.

The first-run Nakoma had just two features playing as it reached its end. It was charging full price for the “Karate Kid III” which had already been run in the sub-run discount house and a low-budget exploitation film. Six empty auditoriums and empty poster frames was not a good sign to the very rare movie-goer. Even the skeletal crew outnumbered patrons on weeknights. It was the city that finally put an end to the charade turning off the power over past due electric bills. It didn’t take long for news of virtually identical stories of the Texas Rand theatres that opened similarly. The Bridge Creek Cinema in Austin, the Burleson 8-screen in Dallas-Fort Worth, et al dropped that Fall.

By December of 1989, the Wall Street Journal reported the scheme of the Rands closing out the Arkansas locations and eventually sending the Rand family to prison as checks to business and employees failed to clear. But the Nakoma found new operators lasting somehow another ten years with legitimate bookings and no THX claims.

Dallas Movie theatres
have a look: 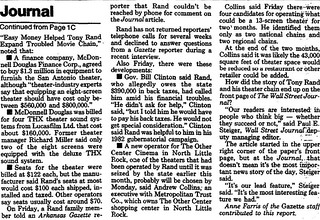 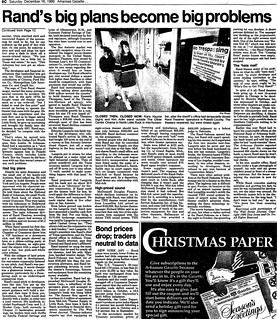 This theatre and the Rand Bandera both opened on May 24th, 1989. Grand opening ad posted.

Neither theatre got “Indiana Jones and the last crusade”.