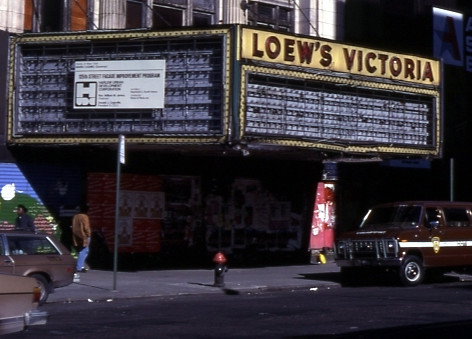 The Loew’s Victoria Theatre opened on October 5, 1917, almost adjacent to the east of the famed Apollo Theatre in New York’s Harlem neighborhood. It was a vaudeville and movie theatre and had a seating capacity of 2,446. It was equipped with a Moller 3 manual 17 ranks theatre organ. This was later replaced by a Robert-Morton 3 manual organ. It closed as a Loew’s house in 1978.

In 1986 it was reopened as a five-plex and renamed the Movie Center 5 on 125th Street. It was only open for a little over four years, closing on January 4, 1990. Someone did screen some African-American art films occasionally in 1992 in one of the auditoriums and it was known as the Harlem Victoria 5, but these had ceased by 1994.

The theatre was sometimes used for church services for a time, but in recent years, it has sat unused. Several plans have been put forward for reuse, but have not been met with sympathetic ears so far.

The exterior is still in good shape; the marquee still said ‘Movie Center 5’ and the building sported a new roof. The Apollo Theatre’s auditorium goes off to the right of the lobby, and the Victoria Theatre’s auditorium goes off to the left of its lobby, so the back ends of their respective stage houses back up against each other. Several buildings down, near the eastern end of the block is the site of the now demolished Harlem Opera House.

In August 2016 the interior of the building was being gutted in preparation for its demolition. The auditorium was demolished in April 2017, with the façade and entrance lobby retained. An apartment tower block has been built on the site of the auditorium.

Interior demolition continues, a worker told me historic ledgers from Loew’s, marquee letters, seats (aisle standards from balcony were trashed into the dumpsters behind the building. NYCB permits show full demolition, however new photos of facade show a vertical sign saying Hotel Victoria (nice). A man walking by cried and I asked if he was OK. He said his mother brought him to the Loew’s Victoria in the 1950’s and he was sad that it was being demolished. Very, very sad! The hotel could have been built between 2nd & 3rd Avenue where a empty Pathmark sits. Who’s running the show, “Big pockets” who don’t care about history! The Victoria should have been saved on this three theatre block. It Could have beeb “the Kings” of Harlem.

Another one into the dumpster. Really really sad

The two murals have been pulvarized. Demo inside first, then outside.

I went to the Loew’s Victoria and the tryphons are still atop the facade. While this one goes, the Apollo next door is more stunning than ever. All new neon and other innovations. A beauty at night in neon. The Alahambra is also being fixed up (the Ballroom) and other amenities as stores, etc. etc. Lobby has been gutted and who knows what the auditorium looks like. 125th Street is getting a major overhaul (unlike Flatbush Avenue between Empire Blvd. to the Junction). Alas, only Thomas White Lambs Victoria Theatre will be gone. Money Talks and the monolith tower that will rise there is most unfitting to this block.

As of last week, the Loew’s Victoria is demolished except for the entance lobby. The land that the theatre sat on is leveled to broken bricks laid out evenly. The bricks were from the ROSE Brick Co. I got a whole brick back in August and a half broken brick last week. Headline description should be changed to DEMOLISHED. Asta la vista!

What remains of the Victoria Theatre will provide two new performance spaces for the nearby Apollo Theatre, according to a report in The New York Times. Link here

I mean its all nice this plan they have. But the 1500 seat theatre is saved, which is great, but the 2300 seat theatre gets demolished. What a shame.

What went wrong with Movie Center 5 that it only lasted 4 years?