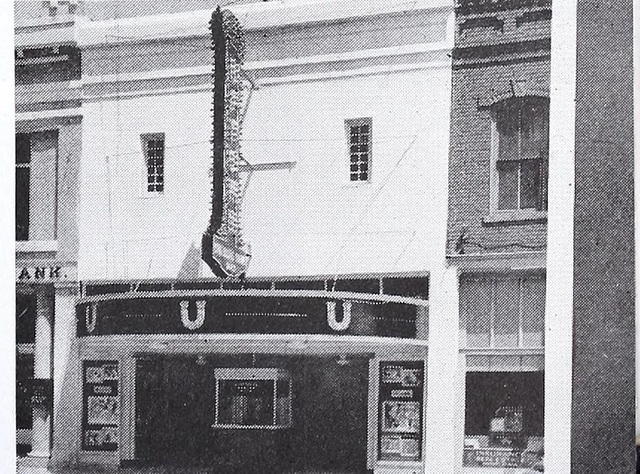 The New Uptown Theatre was opened by Dickinson Theaters on December 8, 1935 with Kay Francis in “I Found Stella Parish” & May Robson in “Three Kids and a Queen”. It was closed in 1946 by Griffith Theaters, and has been demolished.

Dickinson Theatres Circuit opened the New Uptown Theatre here on December 8, 1935 with Kay Francis in “I Found Stella Parish” and May Robson in “Three Kids and a Queen.” The former Uptown had taken over the Best Theatre location in 1928 but Dickinson decided to move it two doors Eastward to a retrofitted retail operation just vacated by Smith Clothing Company, The resulting streamlined deco theatre had a 15-year lease. The former Best / Uptown Theatre was renamed the Dickinson Theatre (and, later, the Kansan Theatre in 1939).

When H.J. Griffith Amusements merged with Dickinson in 1939 creating the Griffith-Dickinson Circuit, Griffith decided to refresh both the (New) Uptown and the Dickinson. The Best/Uptown/Dickinson became the Kansan after a renaming contest. The (New) New Uptown Theatre relaunched on May 6, 1939 with Adolphe Menjou in “King of the Turf.” The theatre sputtered after World War II failing to fulfill its 15-year lease with Griffith Amusement Circuit closing it in 1946. It was retrofitted for a Singer Sewing Machine retail store in 1947.