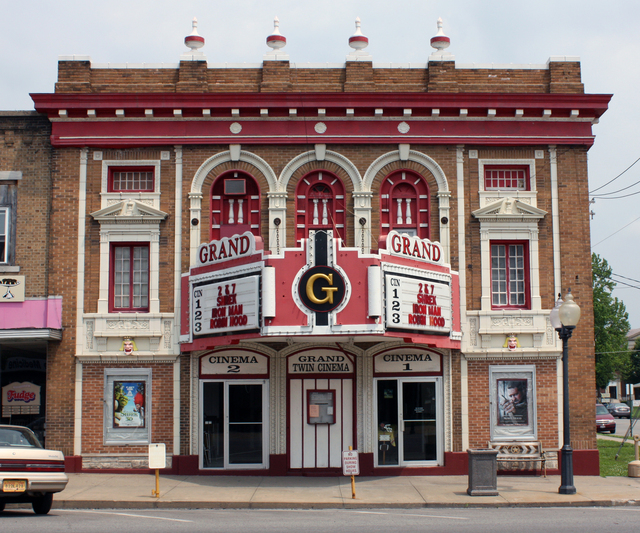 This old theatre, opened around 1914 with 900 seats, is one of the last small-town Art Deco style movie palaces left in Illinois. It is no longer the showplace it was originally, but, it was in daily operation showing new releases for many years. In 1992 a second screen was added in the former balcony. In 2008, it was advertising ‘three’ screens

The Grand Theatre is in need of preservation. The interior is hidden under a couple of layers of “improvement and renovation”. It has many of it’s most amazing assets covered by a dropped ceiling and a few layers of paint. A magnificent marquee is in need of restoration and its Art Deco style concession area is still in good shape. The current owner planned to keep it going as long as possible but is concerned for it’s future.

DU QUOIN- Attendance problems at Grand Theater in Du Quoin forced owners to close the historic theater Monday, but owners aren’t ruling out a re-opening if they can find help with funding.

Rich Baker, co-owner of the theater, said the reason for closing is simple, “We just went broke.”

He said the theater simply couldn’t sell enough tickets to make the business viable. Baker said the theater screened two new releases Friday night, but only around 20 people came to the theater. He said attendance Saturday and Sunday wasn’t much better.

He said he’s tried to keep the theater open. It employed one full-time employee and about 10 part-time employees.

“Attendance has been so bad,” Baker said. “We thought maybe if we had a good weekend we could keep it going.”

Baker said attendance has been an issue since he bought the theater in 2006. He said summer attendance is always better but it drops sharply when students return to school.

As a small, independent theater, Baker said it is more difficult to get films; many times the theater has to put forward an advance to get first-run films, with no guarantee of recouping the cost.

“If we could just break even we’d be happy,” he said. “We invested our entire life savings into that theater. We’ve had some good times, just not enough of them.”

Du Quoin Mayor John Rednour Sr., who was out of town on business, said he first heard of the theater closing Tuesday and, upon his return, was going to see what, if anything, the city could do to help.

Fred Huff, president of Du Quoin Chamber of Commerce, said the chamber will do everything possible to keep the historic theater in operation.

“It’s part of Du Quoin’s history,” Huff said. “There’s just something about a movie theater – it’s the heart of the community. One way or the other, I feel it would reopen as a theater.”

Copyright 2010 thesouthern.com. All rights reserved. This material may not be published, broadcast, rewritten or redistributed.

DU QUOIN – Owners of the historic Grand Theater in Du Quoin have decided to make another go at keeping the theater open.

Scherry Baker, co-owner of the Grand Theater, said she, her husband and son all co-own the theater and discussed ways they might be able to keep it open over the weekend. She said they decided Monday to try to make it work.

The owners decided to close theater doors Oct. 18 because of attendance problems, which they said had been an issue since they bought the theater in 2006.

“We had to scrape together enough money to keep it going,” she said. “I don’t want to see it shut down; it’s personal.”

Baker said working hard to keep the theater open is worth it for her. Being retired, she said the couple enjoys operating the theater and it gives the children in Du Quoin something to do. She said when word got out about the theater closing she received several phone calls from the public and from schools which would go to the theater for screenings.

She said she appreciates the outpouring of support and it was a factor when deciding whether or not to try to reopen the theater.

Fred Huff, president of the Du Quoin Chamber of Commerce, said the chamber would do everything it could to help the theater because it’s an integral part of the community.

Copyright 2010 thesouthern.com. All rights reserved. This material may not be published, broadcast, rewritten or redistributed.

You need to update the status to “Open” as it reopened in November 2010.

The Grand Theatre suffered at least two major fires in its history, one of which was noted in theis item from The Reel Journal of January 23, 1926:

:“The Grand Theatre, Duquoin, Ill., was destroyed by fire on January 14. An overheated furnace is believed to have been the cause. The fire started about 5:15 p. m., an hour before the usual opening for the evening show.

“The theatre was the property of the Reed-Yemm-Hayes Circuit and seated approximately 1,200 persons on two floors. It was erected but a few years ago at an estimated cost of $150,000.”The claim that the house had been built only “a few years ago” was a bit off. The theater had been expanded five years before the fire, but had been opened in 1914. An item in the May 28, 1921, issue of The Anerican Contractor said that Reid, Yemm & Hays were having alerations and an addition made to their Grand Theatre in Du Quion, Illinois. The project, designed by St. Louis architects Kennerly & Stiegemeyer, was to cost $25,000.

An article about the 1926 fire in The Daily Independent of Murphysboro, Illinois, said that the Grand had been built in 1914. But construction might have begun in 1913, as the August 30 issue of Construction News that year ran this item:

Another major fire at the Grand was reported in the Carbondale Free Press of January 23, 1931. This fire, which gutted the auditorium, started in the wiring of the speakers. The house was by then operated by Fox Theatres, the original partners having sold out in 1929.

Reid and Yemm were operating a theater called the Lyric in Du Quoin at least as early as 1910, when they endorsed the Edison Projecting Kinetoscope in an ad for the company in the Octiber 5 issue of The New York Dramatic Mirror. I’m not sure when Hayes became a partner of Reid and Yemm, but the January 8, 1916, issue of The Moving Picture World said that a William R. Hayes had bought the Majestic Theatre in Du Quoin. It was probably the same guy.

Kennerly and Stiegemeyer designed other projects for Reid, Yemm & Hayes, including a 1921 house at Zeigler, Illinois. Since they were practicing by 1913, they might have been the original architects of the Grand as well as the architects of the 1921 expansion.

The sparkling lights of Du Quoin’s Grand Theater, which has been an iconic sight on the city’s Main Street since 1914, went dark on a Tuesday night in September, 2015. The theater will be closed for at least the next few months, according to city officials. “It’s been a problem business for many years. It’s very much loved and it’s a piece of history here, but it hasn’t been successful,” said Mayor Guy Alongi. “We will have to look if it’s financially feasible to keep it open.” Alongi and other city officials are working to gauge interest from the community to determine if the movie theater should reopen, and if the city should buy it or help find a private owner to take over. “We’re going to ask the public a lot of questions,” said Jeff Ashauer, the city’s economic development director. “What do you think the city should do? What would be best for this town?” When Jeannie Burke saw the letters on the theater’s marquee Tuesday night, she knew what her answer would be. “It would be so sad if it didn’t reopen because it’s always been a prominent part of this town, even as other things have come and gone,” said Burke, who works across the street at Main Street T’s. “And what if it’s not there anymore? I hope we don’t have to find out.” Losing the cornerstone business would be tough for Du Quoin, where only a few landmark-type structures remain. “This needs to be addressed, and only time will tell how that plays out,” Ashauer said. Last year, the city loaned theater owner Richie Baker $20,000 to help purchase new digital projection equipment with a price tag of $90,000. None of that loan has been repaid, and Alongi said the theater might have more debt. While the structure is “functioning,“ Alongi wants to make sure the the century-old structure is sound before moving forward. "A new business plan is definitely in order,” he said. “This will be a major investment, so the question will be if the community and the city can stomach it.”

If the theater goes up for sale and the city steps in somehow, Alongi said movies could be showing at the Grand again in the next six months or year.

“Whatever happens, it’s not going to happen overnight,” Alongi said. “When you see that closed sign, it is shocking, but I think we have to take our time and weigh our options with this one."

The Grand was finally sold to a new owner, from Texas, back in August.

DU QUOIN – It would appear that the Grand Theater in Du Quoin sold at auction Thursday.

Mayor Guy Alongi said the word he received was that a buyer located in Texas purchased the building from Regions Bank for $5,000. The name of the buyer has yet to be disclosed.

The bank previously offered to donate the building to the city, but the city refused, citing high repair costs.

“I just want this to be a positive for Du Quoin,” Alongi said. “I hope this buyer has deep pockets and a vision for this building.”

The iconic structure, located on Main Street, has been in disrepair for the last few years. Shows at The Grand were last seen nearly three years ago at the theater (Sept. 15, 2015).

Alongi said a feasibility study was conducted by the city to learn what it would cost to make the necessary renovations and said the cost was too great to tackle.

“It would be close to $1 million,” he said. “And we just can’t justify that kind of expenditure to the taxpayers of this community. Maybe in Carbondale or Marion, but not here.”

The mayor said he is deeply concerned about dilapidated structures in town and how they impact the community. He said The Grand, along with the Elks Lodge, are at the top of the list of buildings needing to be fixed up or demolished, the mayor said.

Alongi added that he would like to meet the buyer and have a conversation with him, offering the city’s support where needed.

The Grand Theater, which opened in 1914 with 900 seats, is one of the last of the small-town Art Deco-style movie houses left in Illinois.

Without someone coming forward to repair it, the building is also at risk of becoming a danger to the public, Ashauer added.

“The north third of the building is in danger of falling in,” he said. “If bricks start falling on the sidewalk, we’ll have to condemn it.”

Ashauer added that the initial $1 million outlay would be just the beginning. New theater seats would also be needed, and would cost about $70,000.

Went by this theater Saturday night (12-15) and was surprised to see the marquee lit up and “Happy New Year” on it. I hope this restoration goes through and the theater is reopened soon. DuQuoin has taken some hard hits in the last decade but it’s one of my favorite Southern Illinois towns and the Fairgrounds are one of America’s most famous.