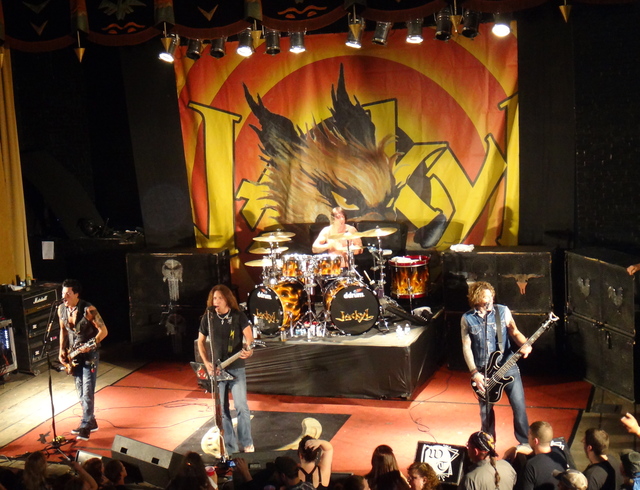 Louis Skidmore (1897-1962), the architect for the John Hancock Center and the Sears Tower in Chicago, designed this Art Deco style movie house on Walnut Street, next to the Odd Fellows Building. It opened in 1931, but started to fall on hard times in the 1960’s and early-1970’s. Those hard times forced its closing in 1998.

Former music teacher Charles Gomez purchased the theatre in the spring of 2007. Gomez used original blueprints to return the theatre’s original appearance, though sometimes using more affordable materials. The theatre will be used for live performances.

The Watseka Theatre/Iroquois Performing Arts Center had a New Years Eve 2007 grand re-opening gala with musical acts and a dinner. The building has a new bar, cafe, lounge and banquet room.

Originally seating 660 and later seating 580, the Watseka Theatre now seats 425 and has a stage. The theatre features hand painted murals, brass and frosted glass chandeliers with matching wall sconces, terrazzo floors and stairways, an original black marble ticket booth, and a neon marquee from the golden age of entertainment.

I would love to go and revive this theatre, its a small farm town, some first runs some classics,,, I have excellent ideas for programing.

From the Kankakee, Illinois THE DAILY JOURNAL “has been closed since 1998 and is offered for sale”.

Does anyone know the current status of this theatre ?

P.S.
I love your site here and have spent way too much of my time looking up oh so many of your listed theaters. Thanks for a great web site!
Peace,
chuck,

Please feel free to contact me with any info or any questions!

Well as you know if you now click the above you now can no longer read the article or see the photos. I don’t really expect anyone to subscribe to the Journal just to read this one article. I guess there must be some some way to scan the article and photos, but I don’t know how to do that so I will just type it out. Is that legal? My typing isn’t the greatest, sorry for any mistakes, wish we had spell check. Sorry about the photos.
From the Kankakee, Illinois, Daily Journal, Friday, December 28,2007

Watseka—On New Year’s Eve, when the restored Watseka Theatre will reopen to the public after nine years, guests won’t get popcorn and a movie.

Instead they will get a look at what a former Cissna Park music teacher has been daydreaming about for 30 years—a hub for art and culture.

That former teacher, Chuck Gormez, and Debra Liddell, a dentist, will reopen The Watseka Theatre not as a movie house, but as a performing arts center available to rent.

The 1931 structure, which Gomez called an art deco treasure, is much more than a theater now. The building has a new bar, cafe, lounge and banquet room complete with closed-circuit television to watch the acts next door.

So far, the only other event (besides the New Year’s Eve Party) nailed down is a March 29 (2008) benefit by the Iroquois County Historical Society that will feature a singing act called the Sweethearts of Branson, Mo. But Gomez says that many local organizations are interested in bringing performers to Watseka or in using the building for their own dances, concerts and recitals.

The restoration has even attracted the attention of a filmaker who is working on a documentary about the project and will include interviews with local people, Gomez said.

Gomez makes a living as a special events producer and produces the Columbia College graduation in Chicago each year. However, he has never restored a theater.

This isn’t just any theater, though. Gomez said that Louis Skidmore (1897-1962), the architect for the Hancock Center and the Sears Tower, designed the building.

It’s also seeped in local history. Gomez has heard stories from local couples who met and fell in love there, and even of a small group of men who pledged to enlist after hearing the news of the attack on Pearl Harbor moments before the movie started.

Liddel and Gomez, who live in Watseka, bought the theater last spring and began cleaning it out. The basement was practecally filled with debris.

Since then. the theater partners have used “ever contractor in Watseka”

While he had copies of the original blueprints, some elements were too expensive to restore. Take the crowns and sconces inside the theater. The original crowns were made from horsehair and plaster and were mounted atop columns of black-painted brick on either side of the theater. They would have been prohibitively expensive to replace, so FP Fiberglass' Fred Cahoe and Scott Burdick turned out replicas of these and other plaster decor that had fallen victims to water damage.

Cahoe said it was a challenging job because the goal was to make the fiberglass look like plaster, not a smooth, contemporary looking surface. “You want to make sure the flaws are back in it,” said Cahoe. “Plaster doesn’t have a certain design.”

The theraer has been downsized from more than 600 seats to 425 new, wider theater chairs.

The auditorium originally had a shallow stage in front of the movie screen for vaudeille acts. The theater was built as the movies were eclipsing the older style of live entertainment. In a way, the renovation project is a throwback because the movie screen has been relocated to the rear wall of the stage area opening up a much larger space for singer, dancers, actors and musicians.

Several original murals are also in the process of being redone. Watseka artist Kathy Blunk created an impressionistic vision of the princess Watch-e-kee (after whom Watseka is named) for the lobby. Liddell painted a new Native American warrior to replace the faded one on the right-hand side of the stage. The image has been emlarged to about 20 feet high and is being hung this week. Originally, there was another male on the left hand side of the stage. However, Liddell is replacing him with a female Native American bearing a dream catcher, instead of a weapon.

In the lobby, art deco touches can be seen in the original terazzo floor, original floor-to-ceiling columns and in the original houndstooth crown moulding, which meets a scalloped design around the edge of the ceiling. The lobby color scheme is teal, nougat and rust — an art deco color scheme, according to Gomez.

The houndstooth is reminiscent of arrows, a design element that was present on the sconces and on the valance over the stage. The black vlance had to be mostly reconstructed, although it’s ready to to put up. In addition to arrowheads, it bears images of large water birds native to this area, which migrate in arrow formations.

And while the marquee still awaits transformation into a white-on-black neon sign, Gomez said Monday that 90 percent of the planned restortation will be finshed by New Year’s Eve.

Photo: Debra Liddell holds up some of the artwork she had hand crafted for the Watseka Theatre.

Photo: Mike Brubach, of Bradley, and Dave Gudeman, of Dave’s Carpentry in Watseka, hang the crowns above the columns in the Watseka Theatre on Monday morning.

“Ladies and Gentlemen, This is CINERAMA!”

Sounds like a first class restoration job; I can’t wait to get down there to check it out.