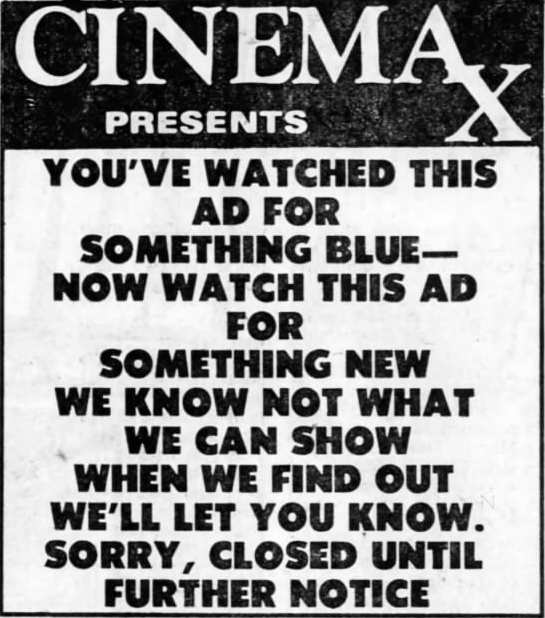 The Cinema X Theatre was opened on February 23, 1973 with “Deep Throat”. Came under attack from local law enforcement officials in 1973 while showing “Deep Throat”, resulting in closure for about four months (the marquee read, “Rated PG - Police Harassment”). It was twinned in 1979 and closed in 1988.

I remember listening to WVIC in Lansing (the local Top 40 station) back then (in 1974 I was only 12), and they carried some commercials for Cinema X. As I’m typing this up, I can still hear that woman’s voice singing the jingle over the soft guitar music:

“At Cinema X….You’re on a rainbow ride.”

One private high school in Lansing (which I will leave nameless and which I had the pleasure of attending from September 1974 until ending 10th grade in June 1978, at which time my father had the brilliant idea – sarcastically speaking – to move us all to Chicago, and I finished at another private high school I didn’t like) was outraged by the fact WVIC was airing the Cinema X commercials that around early 1976 said private school decided not to use the station anymore for school closing announcements (e.g. during bad weather).

One of the administrators said, “I think we are having a hard enough time encouraging our children not to attend Cinema X, etc. We also don’t want incoming students to think this is what older students do during their senior year.” I do agree with all he said. (Admittedly, I did wonder if the seniors did anything like that, but that wasn’t necessarily true. I certainly didn’t!)

Still, it was funny to see this place listed because it made me think of those goofy commercials I heard on the radio when I was a kid.

One last thing I remember:

During the brief closure mentioned above, the theater placed an ad in the Lansing State Journal that went like this: