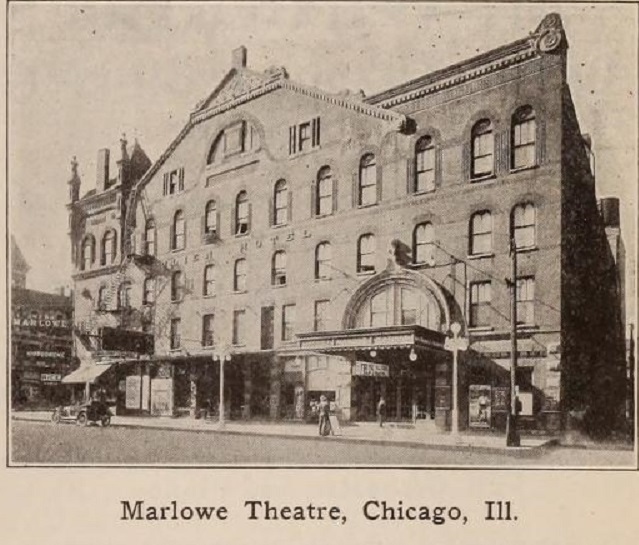 Opened as the Timmerman Grand Opera House on October 10, 1890, the theatre was located on S. Stewart Avenue, not far from W. 63rd Street in the then-mainly Irish and German Englewood neighborhood. The fire curtain showed a scene of Lake Como in Switzerland and it originally seated 1,200. The seats nearest the stage were actually freestanding loveseats. The theatre burned on December 5, 1890 due to boilers being extremely close to the wooden floor in the lobby; it literally burst into flames. The adjoining Hotel Julian was spared.

The theatre reopened on Christmas Eve, only weeks later. It had two galleries/balconies, eight boxes, and had iron stairs to increase safety somwehat. Became the Marlowe Theatre in 1892. Following this there was considerable controversy over Sunday shows. Between 1914-1918 it was officially known as the Marlowe Hippodrome, but more frequently still called the Marlowe Theatre.

Later known as the New Marlowe Theatre (1926), it was closed in 1935 and demolished soon after, replaced by a filling station. In the early-2000’s an apartment building was constructed on the site.

It was apparently remodeled in 1905 by W.W. Clay