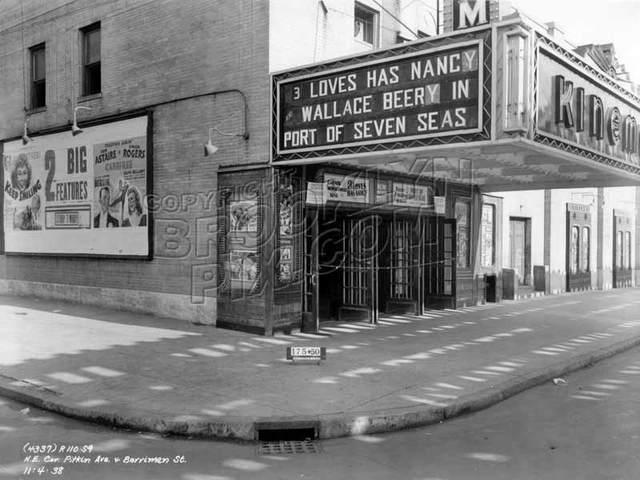 Kinema Theatre was located on the north-east corner of Pitkin Avenue and Berriman Street, in the East New York section of Brooklyn. It was opened on September 11, 1925. It was very popular through the 1930’s-1960’s. It was closed in 1969 and demolished in 1970. By December 1971 a community center had been built on the site.

@MASCHEN The East New York Projects have quite a few pictures of the old neighborhood. I have a MySpace page for Berriman64. Brooklyn Pix also has many memories. On FaceBook there are many Berrimanites and ENYers from the pre 1970 era. That IceCream parlor was high end place. I went to Willies on Atlantic for ices and the Deli Beitziner on Pitkin and Linwood for Ice Cream or German Potato Salad. Moe’s near the Kinema for Kinishes. I lived directly across the street from 64! There are also Cypress Hills and Cityline groups in FaceBook. The seem to be quite a few Italian Bakeries along Pitkin Avenue. There was a candy store on Berriman and Belmont also. Pass by Facebook and join in there was a 50 year reunion of PS 64 last year. There are many pictures there.

FatMan 1059. Thank you for the info. The candy store I was refering to was the second store on Belmont right off of Atkins. I do remember that ther was another candy store on Berriman directly opposite PS 64. As I recall there was also a pharmacy on the corner, Bennets. It carried everytrhing from meds to watches. Also perhaps you may know the name, I think she lived on the first floor of the first or second building from the corner of Berriman on the opposite side of the school her name was Loriane Famene.?

Wow what happen to the print.

I just got on this site for the first time today and for the life of me could not put in a comment. I hope that Maschen finds this comment. We went to the same school. I too had Worhovtic for K, Mcguire for 1st Reilly for 3rd and I moved out in 1960. Bennetts drug store was our pharmacy etc.I think we might have been in the same classes or same age. Went to the Kinema all the time. The Matron was like a parent always having the flashlight shining at you if you talked. Movies then was an all day affair. Yes I remember Dans supermarket. I lived on Fountain between Sutter and Blake. On the corner of Blake and Fountain was a candy store. The name was Abes. He was an old almost blind man. In todays world would never happen. Used to get bottle caps so I can play skelly in the street.

@makoreo I remember a few drug stores along Pitkin Avenue, Sutter and even Belmont. If you are intersted there are sites (groups) on FaceBook that are area oriented. Cypress Hills Houses, CypressHills, City Line, etc. There are also school groups. I know the moderator of this site wants us to stay focused on theaters. Go visit this site for Cypress Hills Houses.

Hello-I lived in this area growing up. I came across this page searching for images of torn down buildings since there is virtually no existing video of film footage of ENY area from the late 60’s and earlys 70’s. In fact there were only TWO known films shot in this area—the infamous Death Wish 3 (shot in 1984) and the pilot to the KOJAK TV series (Marcus Nelson Murders) Does anyone have links to predemolition/renovation photos of this area brownsville-ENY. I am trying to reconstruct an era the city would like forgotten.

@palerder I don’t recall seeing any online but I know that there are sites such as THE EAST NEW YORK PROJECT, FORGOTTEN NEW YORK and BROOKLYN PIX that have quite a bit of pictures. The Brooklyn Public Library and The Brooklyn Historical Society also has many pictures. Most pictures are pre ‘70s. There was one site with pictures of the 70’s. The Link is below.

I graduated from 64, junior high school only. Most of elementary at 158. I lived on Glenmore Avenue. I can’t remember most of the candy stores or drug stores mentioned because I didn’t have the money or the know how to spend. My friend and classmate Sandy’s parents owned a clothing store called Roses just down the block. I do remember a variety store nearby that fascinated me. In high school, Thos Jefferson I worked as a candy attendent at the Congress, Biltmore and wherever they would send me during vacation to relive other attendents.

I lived on Liberty Ave between Logan and Fountain streets from 1956-1961. I remember going to the Saturday matinees at the Kinema to see many a horror/sci fi film, like House on Haunted Hill (with the skeleton literally traveling from one section of the theatre to another), The Blob, etc. I used to get free passes from the Police Athletic League. Spent some good times there. I remember the matrons. Yes, they were prison like guards. But, I guess they had to be tough in order to keep us in line.

I attended PS 64. Went to school with Georgie, Jim, Pedro, Stephen, Roger, Myrtle, Billy Champion, Zoraida, & Linda. Can’t remember the last names except for Champion. I saw a picture of some of these classmates online; Myrtle and Zoraida were in the pic when they were in first grade in 1954-55. I started second grade at the school. I remember that an assistant principal was a tall fellow that reminded me of Randolph Scott, the actor. I joined the band and attempted to play the violin…not very good. The band teacher took us to Carnegie Hall for a concert. I loved it because my dad listened to classical music at home, so I was familiar with some of the music. I recall playing ball during lunch time at an empty lot about a block or so on Belmont Ave. We got into trouble for that…we all got letters sent home to our parents about it. I was in the play, Peter Pan in the fifth or sixth grade. I played an Indian in the musical. I remember prayers and hymns during our school assemblies (before the Supreme Court ruled against this practice). In the sixth grade, in the fall, Richard and I left school after lunch and went to the United Nations building. Unfortunately, Stephen told the teacher he saw us take off. We were in deep trouble with the school and our parents. I got a spanking and grounding for that educational experience. It was the last day I ever skipped school for the rest of my secondary school days.

I recall playing punch ball at a blacktop park near the school (on Atkin Street?). Some guys could really punch that ball for some distance. I would frequent the deli across from PS 64 on Belmont and the soda fountain shop on Berriman. The soda shop was for egg creams and rock'n roll music from the juke box…“Great Balls of Fire” by Jerry Lee Lewis.

I visited the neighborhood several times with my spouse, kids and cousins. It was sad to see the Kinema and PS 64 gone. But what fond memories to share.