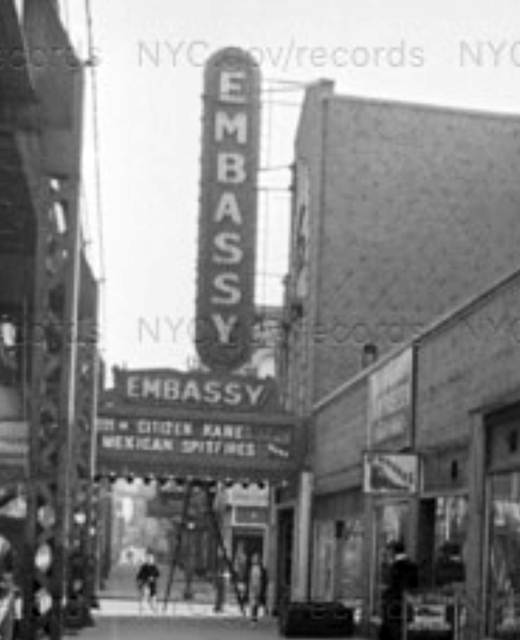 Located on Fulton Street & Richmond Street in the Cypress Hills section of Brooklyn. The Concord Theatre was opened in 1914 with 600 seats. It also had an open air theatre capable of seating 1,200. By 1926 it was operated by the Meyer & Schneider chain. A new 1,473-seat theatre was built on the site in 1927, designed by architect Harrison G. Wiseman which opened around April 1927. It was equipped with a Wurlitzer 2 manual 7 ranks organ. It was closed in 1968.

Since demolished, a senior centre now stands on the site.

Forgot to add my e-mail address, which is

I think coming up with a chatroom would be a great idea. Im sure many will meet there and talk over old times.

Yes you sent it correctly

I Just responded back to you. Chatroom would be a great idea.
In my reply i mentioned Tapeshare.com
They have a Guestroom open to anyone who wants to share thoughts and memories. Check it out.

The Embassy was considered to be the “better” movie theater in the neighborhood.
The manager was famous.

I grew up in East New York, Brooklyn and remember the Embassy as being close to the Brooklyn/Queens borderline. I can only remember going to the Embassy twice with my father in ‘65 or '66. We saw a rerelease of “The Bridge on the River Kwai” (which I remember being something of a disappointment since my father told me it was the greatest P.O.W. film ever and I so much preferred “The Great Escape.”) and Charlton Heston in the excellent “Khartoum.” And while I do not remember any specifics, I do remember that this was a very nice neighborhood theater.

My name is RoseMarie Randazzo Pellegrinelli, I lived at 3232 Fulton Street where my parents owned Animated Toy Company from 1942 until I married at Blessed Sacarment in 1962. In the early 40’s my Father would rent the movies from the Embassy Theatre and show them to our family, friends and employee’s. Sometime he would set up his projector at the Convent for the Nun’s to see some of the movies. I loved the Embassy, as a little girl I paid 25 cents and latter 26 cents, the extra penny was for tax. The Treatre to me was majestic when you walked in it was like walking into Hollywood, the Red Velvet drapes and red rugs were so lavish. You are right about the ushers, they were scary in their white uniform and holding their searchlight. But it was very well controlled and I felt safe there.