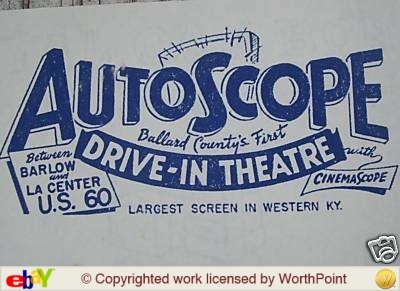 I don’t know a lot about this drive-in other than advertisements and memorabilia I have seen online, despite the fact that I lived near the town of Barlow quite a few years after it closed. It was located on Highway 60 between Barlow and La Center. It opened on July 24, 1957. Advertisements indicate that its CinemaScope screen is “the largest in Western Kentucky”, which is interesting to me because the name “AutoScope” would seem to indicate that it was an autoscope type drive-in with small individual screens for each car. I believe the name “Autoscope” was copyrighted. So I don’t know if this was originally an autoscope that converted to a traditional drive-in, or they were using the name without permission. I don’t know how long this drive-in was open. I lived near Barlow in 1983, and nobody ever mentioned remembering it, and there was no trace of the drive-in left on Highway 60 between Barlow and LaCenter. I would like to learn more about it.

That is going to be a tuff one to find. I think I know where it was at in looking at early aerials. I think you are correct about using the name “Autoscope” from what I can find. Clark Smith advertised for somebody to gravel/grade a 600 car drive-in on Aug 11, 1956. Found a few ads and Smith held auctions there also. 600 cars is pretty big and should be seemed on aerial views. But not… He was screening movies up to 1966..

If it wasn’t for the advertising, I’d never believe that a 600-car drive-in theater would be built between two towns with a combined population in 1960 at about 1,700 people. Plus, about 15-20 miles from Paducah to boot.

Drive-In 54 has sharper eyes that me since I’m not seeing any place between the two towns that indicates anything approaching the size of the drive-in. So, it was totally demolished for farmland it appears.

I lived in Cairo IL (about 12 miles from Barlow) from 1983 until 1997, and during that time, I tried to gather information about all the drive-ins in southern Illinois, and western Kentucky, but was never aware that this one even existed. I never heard anybody even mention it. There was one drive-in in Cairo, and several in Paducah, and though most of those were closed by 1983, there were remnants and/or memories of all of them. With regard to location for such a large drive-in, you have to remember that Cairo was still a thriving city of almost 10,000 in the mid-50’s, and so it is likely that it could have also drawn from Cairo as much or more so than Paducah. When I first heard the name “autoscope”, I just assumed that it was a traditional autoscope, which were geared towards small towns and small fields, but a 600 car drive-in would require a lot of land. It is interesting that he used the “autoscope” name, designating the smallest drive-in screen imaginable, to advertise the Cinemascope “largest screen in Western Kentucky”! It’s interesting also that it may have at one time been called Superscope instead of Autoscope.

bbrrown have you tried asking any of the local historical society’s or library’s?

The name makes sense if it started out as an autoscope drive-in, then converted to a single, large screen as many of them did. But for whatever reason, they decided not to change the name.

Even with Cairo nearby, a 600-car drive-in seems awfully ambitious. My guess would be that they had plenty of cheap land to use, so there was no downside into making it that large.

While it is not unheard of to so totally demolish a drive-in that no trace exists, it does seem like overkill to do so thorough a job that they even took out the screen foundation and entrance just to make it farmland.

With the gracious assistance of the Ballard-Carlisle Historical and Genealogical Society, I have been able to locate and download a photo that includes the Autoscope Drive-In from 1962. They believe it continued in operation until at least 1965. So far, the folks I have talked to do not remember it being an “autoscope” type drive-in, but they are checking with their membership to see if anybody remembers if it started out that way. They also are trying to help me locate a more close up view of the drive-in. Hopefully, I will have more information soon.

If the photograph is accurate, then the address was 3871 West, La Center, KY. It was located east of the Ballard Memorial School, which you can see in the foreground of the photo.

Today, the property holds a few businesses with the address being where the screen was located. There is no trace of the drive-in remaining.

I understand the desire to make the address an intersection, but the one currently listed is too far west.

In the photo, you can see the treeline running on the south side of the drive-in. A 1952 aerial photo shows that same treeline starting at the 3871 West, La Center, KY address and running south/southeast.

If an intersection is desired, then Paducah Road and Aspen Drive, La Center, KY is better because Aspen Drive is right across the street.

Interesting that the mailing address was Barlow, because that location is much closer to La Center than Barlow, but I guess that it was on a rural route (Route 2) out of Barlow rather than La Center. Boundary lines for post offices do not always align with town lines or city limits!

The Modern Theatre section of the April 7, 1958 issue of Boxoffice ran a one-page article about the Autoscope’s efficient concession stand. Among the details:

The drive-in was run by Clark Smith, who learned the trade in Texas “before returning to his native western Kentucky county”. The Autoscope held 600 cars and 600 walk-ins, had a 105x52-foot screen, and cost $125,000 to build. It opened July 24, 1957. Cairo IL provided a lot of the patronage, but the bulk of it came “from Ballard County, population 8,545, Smith’s drive-in being the only outdoor operation in the county.”