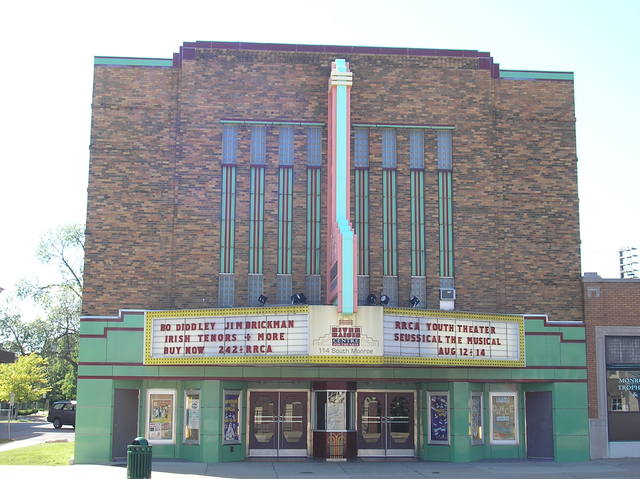 The River Raisin Centre for the Arts (RRCA) was founded in 1988 as a not-for profit organization by a group of community leaders. The dream of the founders was to create an arts center through the restoration of the 1938 Art Deco style Monroe Theatre in Historic downtown Monroe. The City of Monroe has a population of 25,000 and is located in the largely rural Monroe County in southeastern Michigan.

The Monroe Theatre had been vacant since 1975 and was in danger of being razed for real estate development. The Monroe Community Players, the local community theater group, and civic organizations began a massive clean up of the interior of the building. Local businesses donated money to replace the roof and make other critical repairs. Several local groups began using the facility for presentations during the next few years, but the dream of fully operational arts center was largely unrealized. The local economy was particularly hard hit by the economic downturn of the early-1990’s.

The RRCA Board of Directors continued to govern and operate the Centre on a volunteer basis through 1995. Local economic conditions improved and the Board of Directors hired the first professional Executive Director in January 1996. The increased service to the community was immediate and dramatic. In 1996 the RRCA offered the first six show series of touring artists, a dance academy, and a summer theatre arts camp for youth.

Facility use grew from 60 days in 1995 to currently more than 300 days in use, with touring artists, local presentations, performing arts classes, and workshops. During that same period, $750,000 in capital improvements have been made to the Centre. Today, the River Raisin Centre for the Arts is the largest and only full service performing arts organization in Monroe County.

The success of the RRCA has been recognized by the community through increased participation, volunteer support, and contributions. The Board of Directors and Staff are currently developing a five-year strategic plan to capitalize on the community response and demand for more performing arts services.

Sheer luck got me inside this theatre. Some people were rehearsing for a performance on Saturday May 15, 2004, so I walked inside. A lovely art deco theatre with a nice balcony and a seating capacity of about 1200. The theatre was built in 1938. The art deco chandalier in the foyer area is very impressive. Although some staff members were present during my self tour, most seemed to know very little about this lovely theatre which makes their employment and their productions possible.

Richard G: Interesting story. I have a former college dormitory friend who grew up in Monroe so must ask her about her memories of the Monroe.

The address for the Monroe/River Raisin Centre for the Arts is 114 S. Monroe St, Monroe, MI 48161. The website is www.riverraisincentre.org

The Monroe Theatre was built for local exhibitor J.R. Denniston in 1937. It was designed by the Dearborn architectural firm of Bennett & Straight.