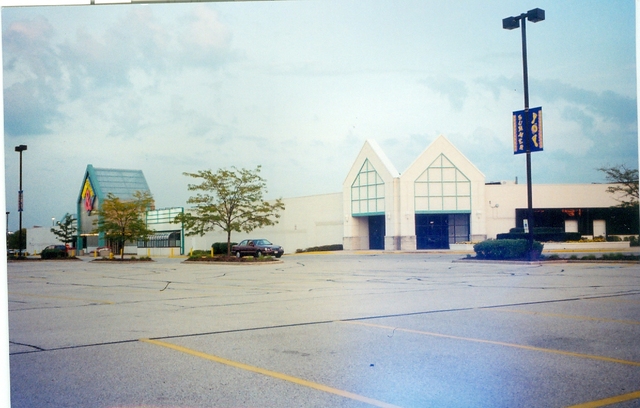 This former Cineplex Odeon six-screener was located at the now closed Town & Country mall in Arlington Heights, on Palatine Road. It opened May 22, 1981 by Essaness Theatres and closed in 2001.

Hey Anna Banana….. I remember you, thanks for bringing back some of the great times of High School Life. Those late night parties were a blast. As an usher that worked there I was up to date on every movie that came out for many years. Even though you see portions of movies while working, the free movies made it possible to see at least one movie a week. Going to the movies is still one of my favorite things to do.

Part of the demise of TNC was also the opening of Ridge Cinemas under the parent company of Cineplex Odeon. A true palace when it opened. But as with all things, that theater as beautiful as it was, suffered from an overpopulation of movie screens in the Chicago area. Trying to monopolize the market place, Garth Drabinski (former CEO of Cineplex Odeon) over extended himself and the company was eventually bought by Lowes Movie Theaters, at which time the less pretty theaters such as TNC, became extinct.

As Anna said earlier, more than one person (including myself) landed on that inclined tile floor of the concession stand.

Just past the hallway was the access for the two major theaters, where the first run popular movies saw life. Down each hallway sat two minor theaters that were smaller in size maybe 80 – 100 people could fit in each of those.

The best time that a guy could have is being a teenager theater usher, you had the power to confiscate the beer that patrons would bring in and of course drink the full unopened ones later, not to mention having the authority to kick out movie hoppers. It was easier back then. The theaters were smaller.

The brown polyester was not fun to wear, definitely hot in the summertime.

It was sad to see it go. I think I still have my nametag from the Essaness days.

Take care of the memories!!

Here’s a couple of pics I took of the shuttered Town & Country mall exterior. I believe this has now all been torn down. This entrance also lead to the theater. I wish I put my camera up to the glass for a few photos…I might have caught the theater in the back.

That’s an interesting ad, Ken MC. Only the Catlow and the Liberty 1&2 remain open, all of the others have been closed.

I’ve got to disagree with several of the previous commenters. Granted I never worked here as I was too young, but that youth’s memory has it’s advantages. I remember the concession stand squarely up against the west wall with a large open space behind the ticket booth but in front of the theaters-where others have said the pentagonal concession stand was. They must’ve moved it at some point because I Distinctly remember a mosaic of comic and movie characters over the western concession stand. Now to add more details: the two main theaters (don’t remember what numbers) were straight in from the lobby. One was east and the other west facing. On the south side of the theaters was a hallway that house the other 4 smaller theaters. The two large ones were fairly narrow, I’d say no more than 50 seats wide, but 2-3x as deep. I can’t say I remember seeing a specific film here, but know I went numerous times.

The mall closed for numerous reasons. The theater and arcade (Just for Fun) was a great 1-2 punch for families, the theater gets the adults there and the Arcade hooks the kids. The western side of the mall wasn’t too well off (it house a temporary haunted house one year I remember) so Lord & Taylor consumed that whole west end. Then both it and the theaters went out almost simultaneously, it was too big a loss for the mall to survive. With the theaters gone, the arcade didn’t last and neither did the gaming store. The Dick’s is now open, a Jo Ann’s took over much of the Lord & Taylor, in fact, you can tell form inside where the mall hallway was based upon the ceiling joists.

A shame this theater went out since I lived SO close to it.

Brian,
Great post. You are correct, but those of us that worked there in the early days, are also correct. When the theater opened as an Essaness Theater the concession counter was centered in the lobby. Two “holding pens” were often created for the theaters that held the most amount of people. Those were theaters 1 & 2 located straight in from the lobby. They had a capacity of approximately 300-400 people. In those days, these theaters seemed quite small compared to the Big Brother theaters at Woodfield which held 1000 and 800 people. Back then it was not uncommon to have lines of people snaked into the mall waiting to see the big show that was premiering that weekend. On a weekend night, the only things that were open in the mall were the Theater, the game room and of course Swensons Ice Cream counter.
This was a favorite location of all the theater employees.

Around the time Cineplex Odeon was entering the Chicago market, they had purchased Plitt Theaters, then Essaness theaters. Town & Country theaters did not fit into the “design” that Cineplex Odeon had made famous in other parts of the country. Thus Town & Country was closed for renovations.

One of the most significant renovations that was done was the move of the concession stand to the side wall of the lobby, as indicated by Brian’s memory.

The theaters did not recieve significant renovation to attact people away from the Multi-Million Theater – Ridge Cinemas, that was the jewel of the northwest suburbs. It had old school theater seating with uncomfortable chairs. No rocking, and not much padding.

It was reopened as a Cineplex Odeon Theater.

Wow… I worked at T&C during my Senior Year, in 1983, with Chris Lindgren. That was fun, espcially when we played movies like “Let’s Spend the Night Together” by the Stones….

Plenty of after work gatherings in the back parking lot, sometimes fueled by any unopened beer we could confiscate from the patrons, specifically, patrons that came to see the above concert films.

I also remember First Blood, Tron, Tootsie, etc… It was tough to watch these movies on video later, since I had seen the ending about 100 times…lol..

I know this is an old thread, but if anyone has any picture scans of the theater or any pictures of the old Town & Country Mall can you please upload them? Billymac’s photo link doesn’t seem to be working: