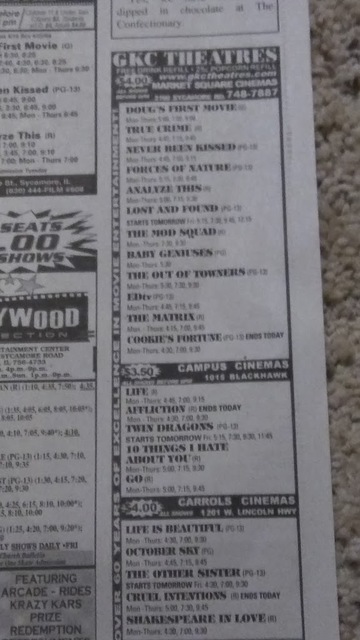 The twin-screen Carrol’s Cinema 1 & 2 launched January 19, 1972 with the films, “Dirty Harry” and “McCabe & Mrs. Miller”. The theatre was acquired from Carroll’s by Kerasotes continuing under the GKC or George Kerasotes Corp. Circuit until closure.

To remain competitive, Carrol’s auditoriums were each twinned leading to a four-plex simply called Carrol’s Cinema. GKC opened a ten-screen theatre in DeKalb in 1998 and when water issues at Carrol’s occurred, the circuit decided to shutter the location. The cinemas closed on July 23, 1999 with “The Mummy”, “An Ideal Husband”, “The Matrix” and “Tea with Mussolini”. The building has since been demolished.