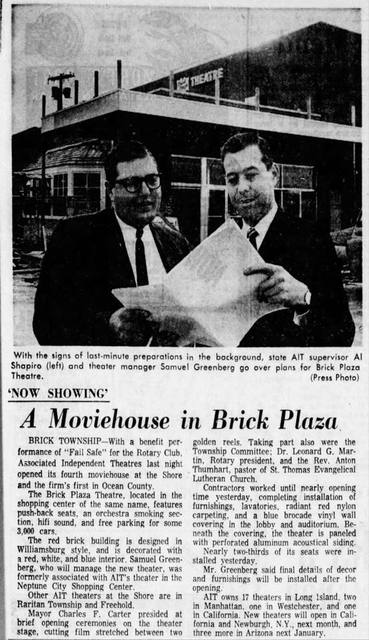 Associated Independent Theatres Inc. (A.I.T.) Circuit launched the Brick Plaza Theatre on October 8, 1964 with the film, “Fail Safe" starring Henry Fonda. The Brick Plaza Shopping Center containing the theatre had opened in 1961. Architected by Charles Gottwalt, the A.I.T. cinema was a single-screen venture with 973 seats at opening. The new Colonial architectural style including a bay window opening to an indoor garden were highlights of the red, white, and blue building that was designed to match architectural consistency of the existing shopping center.

This was AIT’s third theatre. The success of this location spurred a second theatre, The Mall Cinema, which launched at the Kennedy Mall on April 2, 1969 with the same architect and style. One month later, both theatres became part of the Music Makers Circuit which purchased A.I.T. on May 7, 1969.

On January 2, 1987, the Music Makers Theatres became Loews Theatres. The theatre closed as the Loews Brick Plaza Theatre 1&2 on August 20, 1992 with the films, “Stay Tuned” and “Diggstown”. Five years later, on August 29, 1997, Loews launched a new 10-screen Brick Plaza Theatre providing a new location within the plaza for moviegoers.